Middlesex have named Joe Burns as their overseas replacement for Adam Voges who will leave to join Australia’s tour of West Indies in mid-May.

Burns, who made his Test debut for Australia against India last December, will be available for seven County Championship matches and 12 Twenty20s before himself departing for an ‘A’ tour to the sub-continent.

“We are delighted to be signing a hungry young Australian who will be desperate to show everyone what he is capable of doing”, Middlesex director of cricket Angus Fraser said. “Joe is an exciting young batsman who has had an excellent winter and was unfortunate to miss out on Australia’s tours. Ironically, it is probably Adam Voges who took his place in the touring party. He has experience of batting anywhere in the top six, is a very good limited overs player and is an excellent fielder.”

He said: “I’m very excited to sign with Middlesex for this season and to be linking up with this fantastic group of players. I’m looking forward to joining my team mates in May as I’ve heard great things about the club culture. The chance to call Lord’s home is going to be special. The club has high ambitions for success in Division 1, which was important for me. I am thrilled to get the opportunity to contribute to what is hopefully a very successful period for the club.”

Fraser confirmed on BBC London radio that a further overseas signing will be announced for the final part of the season. Chris Rogers was in discussions about returning after the Ashes but that is now uncertain as that would mean the club having four different overseas batsmen in the Championship this season. In addition a Twenty20 specialist for the first six games of the campaign will be confirmed shortly. 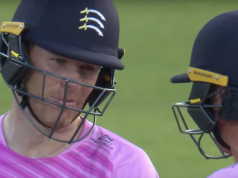 Malan stars as Gloucestershire succumb to a soggy end