The left-arm seamer is due to appear for Sunrisers Hyderabad in the Indian Premier League, possibly delaying his arrival at Hove should his side progress.

Rahman will be also available for parts of Sussex’s Royal London One-Day Cup campaign once Ross Taylor departs at the end of July.

The 20-year-old burst onto the Test scene in remarkable fashion, boasting Hashim Amla as his maiden Test wicket amidst a spell of three wickets in four balls against South Africa.

He’s since gone on to appear for Bangladesh in all three formats, becoming just the tenth player in history to take five wickets on ODI debut when achieving the feat against India.

The starlet is set to make history at the BrightonandHovejobs.com county ground, becoming the first Bangladeshi to feature for the county.

Mustafizur said of his move to Sussex, “I am very excited to get an opportunity in county cricket. It has always been an ambition of mine to play in England and I am thankful to Sussex for this opportunity. I hope I can repay the faith they have shown in me with my performances on the field.”

Sussex’s Head Coach Mark Davis said, “I am really excited to have Mustafizur join us at Sussex Cricket. He is a cricketer with incredible ability and is currently one of the bright young talents of world cricket.

“His unorthodox bowling variations make him a very difficult customer to bat against, and he will be a brilliant addition to our team.” 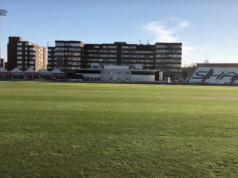