If they were encouraged to take on ‘senior roles’ at work, many twenty-somethings would recoil and race to the nearest mirror to check their receding hairline.

Quite apart from the norm, Sussex duo Ben Brown and Ollie Robinson are relishing the positions of responsibility they occupy in the county’s youthful cabal.

The emergence of a group of young leaders from this squad will be crucial if they want to bounce back from relegation at the first attempt under new coach Mark Davis and new captain Luke Wright.

Brown, 27, signed a new three-year contract at the County Ground over the winter after a breakthrough year in 2015.

“It’s the first time I’ve signed for as long as three years, so it’s a long time and a time you can look at your future,” he said.

“It will take me up to 30, which is quite frightening really. I look at some guys in the squad and players we play against and they’re born in 1994. It’s crazy!

“Things move on and you’ve got to take more responsibility. It’s good for me and it will be good for my cricket. It certainly helps me day to day if I’ve got to set the right examples,

“I can’t let my training slip as people are obviously now looking to me to set the tone.”

Robinson, 22, whipped up a storm in his first season on the south Coast and was also rewarded with a fresh three-year deal in the off-season.

“Coming through here with a young squad, everyone has to mature quicker as there’s not as many senior players to help you through – so you have to take a senior role on yourself,” he commented.

“The really young players we’ve just signed look up to the likes of me and Matt Machan, we’re only 23 but we’ve got to mature quicker and I think that’s helped us.”

Sussex’s singular reputation for breathing life into careers that are threatening to hit the buffers can be put down to more than the sea air in Hove.

It’s about impelling individuals with responsibility and encouraging them to take ownership of their actions on and off the field.

This has allowed Robinson to learn from the circumstances behind his sacking at Yorkshire, which he insists he has put fully behind him.

“I think my talent has always been there, I just don’t think I’ve exposed it as well as I should have,” he said.

“At Yorkshire I mucked around a little bit but I’ve come down here, learnt my lesson and got on with cricket. I’ve sort of put the side to bed. I’ve trained hard down here, working on my bowling and have tried to keep things simple really.”

The bowler attests to, even boasts of, the tight-knit nature of the Sussex squad and the role this has played in the rebirth of himself and others.

“It’s such a family set-up. We’re a close squad, I wouldn’t imagine many squads in the country are as close as we are, we do everything together. I think it’s just a good environment to be around.

“The training facilities are good, we’ve got a good backroom staff behind us so all of that helps us through our careers.”

Wicket-keeper-batsman Brown recognised the repartee Robinson recounts, although sought to emphasise the importance of this not softening the centre of his side.

“It’s definitely a group that gets on brilliantly well, which is our strength,” he said. “If anything we’ve got to be careful we don’t get on too well- we’ve got to be honest with each other as well.

“Certainly it’s a very happy camp to be in, full of people who want to do the right thing.”

It is this kind of awareness of the team dynamic that has seen coach Mark Davis install Brown- who he has described as a ‘natural leader’ and a ‘positive influence in the dressing-room’ – as vice-captain for the coming campaign.

Brown’s interpretation of the role is to ensure that Davis’ ideas are effectively disseminated through the dressing-room.

“It’s a good role for me to take on. It’s my home club so perhaps it’s extra special to me. I see it being a good partnership and I think me and Luke Wright will work well together.

“We’ve spoken about how I can help him and how we can hopefully keep one message coming from the coach.

“Hopefully I can facilitate it through to the players as much as I can so we’ve got everyone going in the same direction, which isn’t always easy across a summer.”

If Robinson and Brown can build on their breakouts, it could be a golden summer for Sussex.

Have you Wintered well? Part 12: Kent

Have you Wintered Well? Part 5: Gloucestershire 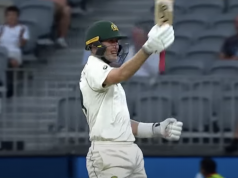