Northants became the only team to retain a 100% record in the Natwest T20 Blast as they won the battle of the North group’s undefeated sides at Wantage Road, cruising to their victory target of 145 to win by seven wickets with 21 balls to spare.

The Worcestershire innings never got going after losing three wickets, including the returning Moeen Ali, in the powerplay and despite Darryl Mitchell anchoring his side with 44 not out, the Rapids never found any momentum.

It was a different story for the hosts however, as Richard Levi’s 24 ball 44 got the Steelbacks off to a flyer, before Josh Cobb’s unbeaten 56 guided the hosts home with three and a half overs to spare.

Worcestershire had also won their first three games, but this defeat sees Northants climb above them at the top of the North group on run-rate whilst Sussex’s defeat to Surrey means Northants are the only side to have not yet lost in the competition this season.

It is a marked contrasted from their start in 2015, when they recovered from losing their first three games to finish as runners-up and head coach David Ripley was delighted with his sides all-round performance.

“We put half a performance in in the other two games, we were a bit short with the ball but batting very well, but we top a real top effort in all round,” Ripley said. “Worcester have played three won three, so it was a real top performance that.

“We put them under pressure, we picked up early wickets which helped, and then we really kept it dry in terms of boundaries in that middle period and then it was important we played as we have been at the start and Richard [Levi] did that.

“He’s been phenomenal in the three games we’ve played. Every game’s been the same; he’s hit the ball sweetly both sides of the wicket. In T20 cricket being consistent in the powerplay is one of the hardest gigs, to have done it three out of three is a very very good effort.

“It’s a great position, we didn’t panic last year when we were nought from three and we haven’t got to get carried away being three from three this year, there’s still a lot of games left and we’ve got to keep eeking out those wins but obviously it feels a bit better this year than last year.”

However the win was overshadowed by a serious injury to fast bowler Olly Stone, who after dismissing Ali, caught behind off a bounce, jumped in celebration and appeared to land awkwardly on his knee. The 22-year-old attempted to bowl his next ball, before collapsing in his delivery stride and having to be carried from the field.

Stone’s dismissal of Ali, who made nine after being released from the Test match squad, was one of three inside the first six overs, after Tom Kohler-Cadmore skied Rory Kleinveldt to mid-on, and Joe Clarke was bowled by Muhammed Azharullah.

Mitchell tried to rebuild the innings alongside Alex Kervezee but in doing so got bogged down against the spin of Seekuge Prasanna and Graeme White, and the side went 52 balls without a boundary, Kervezee giving into his frustration as he holed out to long-on off White.

Ross Whiteley briefly threatened to ignite the Rapids innings, ending the boundary drought with a six off White, and hit two more fours, but before he could really get going he picked out the man at deep square leg.

That brief stand of 30 in three overs apart, the momentum soon fell away again, Kleivneldt and Azharullah combining well at the death, Mitchell only finding the boundary twice in his 36 balls 44, whilst it took two final over boundaries from Ben Cox to drag the visitors to 144-6, with only 11 fours and a solitary six.

On the same pitch that Northants successfully chased 195 against Derbyshire seven days ago, the total always looked below par, and it proved woefully so, especially once Northants had raced to 77 off just seven overs thanks to Levi.

The big South African had hit 61 and 58 in his opening two T20 knocks this season, and carried on in the same manner taking Matt Henry for a pair of trademark leg side flicks, before four further boundaries off Joe Leach’s over meant Northants had equalled Worcestershire’s tally of fours inside five overs, Josh Cobb also getting in on act with three off Jack Shantry.

Levi clubbed Brett D’Oliveria for four and a huge six over mid-on, but was out caught and bowled off the following ball, his 163 runs nine shy of Daniel Bell-Drummond as the Blast’s leading run scorer so far.

The rest of the innings was a cruise for the Steelbacks led expertly by Cobb, who took few risks but was able to find the boundaries when needed to ensure no pressure could be built.

He hit five fours and three sixes altogether, and despite Ben Duckett holing out off Ali for 24 – Ali the pick of the Rapids bowlers with 1-16 from four – Cobb brought up his half century in the 17th over, before finishing the match in style, smashing Leach for six over midwicket.

Man of the match: Josh Cobb’s unbeaten 56 guided Northants home as they cruised their victory target. Richard Levi’s 44 set it up but Cobb his five fours and three sixes, the last of which ended the game as Northants made it a perfect three wins from three. 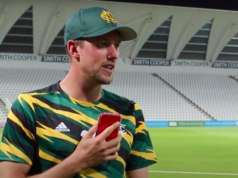