To sit and listen to head coach Matt Walker speak so passionately about Kent suggests two things. The first is that the team is being led by a man who has an undying love for the club with whom he spent 15 years as a player.

The second is that the club is clearly in good hands after a turbulent winter of changes behind the scenes. Paul Downton was brought in as Director of Cricket, Allan Donald as Assistant Coach, while Ben Green replaced the outgoing Jamie Clifford as chief executive — even the head groundsman announced his retirement at the end of this season.

These changes have largely been positive, though, and they were bolstered by the signings on the pitch of Heino Kuhn, Harry Podmore, and Matt Henry. The loss of Sam Northeast, to Hampshire, was disappointing but they have coped pretty well in his absence.

The new regime brought about new styles and new plans. Kent, at the time of writing, sit second in Division Two and approach Saturday’s Royal London One-Day Cup final against Hampshire in good spirits. They did demolish reigning champions Nottinghamshire in the quarter-final, after all.

Walker is candid as he admits he didn’t expect such success so soon. “We spoke about a two, three year plan, about trying to build some blocks to get where we want to get to, and I think it helps when you’re winning.

“I think we’re lucky that we’ve been trying to change a few things and we’ve had success on the back of it. I think that’s powerful and from my point of view I’m really pleased it’s happened because it’s shown the players that if we get it right off the field, some amazing things can happen on the field.”

So what have Kent changed off the field aside from personnel? Most notably, the attitude, which has allowed the players to express more freedom, both in the dressing room and on the field.

“It was an opportunity to really start putting a stamp on what my philosophy is, which is about culture,” Walker explains. “The players also share that philosophy, they want to play in a team that has a culture. It has some standards and values that they agree to, nothing major but a few standards that we hold highly, that are important, and we have a dressing room where it’s a family.

“So people have the freedom to go and express themselves on the field. It’s their careers and everybody works very hard. When you walk across the white line, it’s your game. You’ll have help along the way because you’ve got a captain and experienced players, but go and express yourself. You’ve done all the work, go and play, enjoy it, and try and bring that sense of fun back to the club.”

The trio of imports — plus overseas signings for the Vitality Blast Adam Milne, Marcus Stoinis and Carlos Brathwaite — suggested a step in the right direction. Kuhn and Henry, in particular, have been inspired signings.

Going into the current round of Specsavers County Championship fixtures, no one has bowled more overs this season than Henry, who has 49 first-class wickets and 16 in the One-Day Cup. Meanwhile Kuhn has blasted his way to centuries in four of his last five One-Day Cup innings. No player has previously done that in English domestic List A cricket.

“What he’s done for us this season already has been beyond the call of duty,” Walker says of Henry. “The workload he puts in for us, you don’t always get that. When it really matters and when he’s feeling it, to keep grabbing the ball, to keep wanting to do it. He wants to further himself with his international aspirations but not once have I ever felt he’s here for any other reason apart from wanting Kent to win games of cricket.

“We’re not a big, big club. We haven’t got the money to be able to cherry-pick the best players into your squad; I’m not sure I’d really want to do that anyway. I think it’s a case of building something from the start.

“We can’t offer a Test match venue, we can’t offer them the best facilities in the world necessarily but [it’s] not bad — we’re pretty lucky to have a ground like this. I love it. The players love playing here. What most interests me is to have a group of players that want to play for each other, and care about each other, and when it comes to the tough situations you know they’ll fight absolutely to the death to get you through those situations.”

They’ve faced tough situations on their journey to Lord’s. At Hampshire in the group stage, Henry held his nerve to defend four runs in a brilliant final over, while Podmore hit the winning runs with two balls to spare and Kent eight wickets down in the semi-final at Worcester.

“It doesn’t really interest me who’s favourites or not,” says a resilient Walker. “It’s on the day, whoever plays the best cricket will win. I don’t really worry too much about who we’re going to face.”

A simple, calm message befitting his new style. The word is out: Kent fear no one. 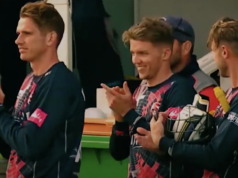