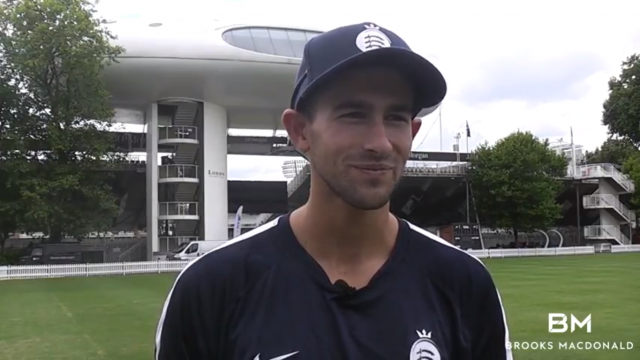 If July 26, 2008 marked Middlesex’s most triumphant moment in Twenty20 cricket then the same date ten years later may well go down as one of their most remarkable.

A decade has passed since the Londoners proudly held aloft the Twenty20 Cup trophy for the first, and so far only, time – a glorious victory by just three runs over the Kent Spitfires.

But as Hampshire’s Colin Munro struck his second half-century in a week to anchor a chase of 166 that seemed nailed on, those days appeared to be a distant memory.

Indeed, defeat would have seen Middlesex cast adrift at the bottom of the South Group – a place they’ve occupied so many times before.

But yet from somewhere, somehow, they found a steeliness thus far absent from their campaign in all forms. A win by 22 runs doesn’t paint a full enough picture.

The collapse of the visitors from 89-1 in the ninth over to 143 all out perhaps does – a chase going at a canter before the horse bolted.

Australian Ashton Agar was the main instigator, a wily and career-best spell of 3-17 enough to see off a stumped Sam Northeast, Munro and Rilee Rossouw, the latter two in game-changing consecutive balls.

But as Tom Alsop and Liam Dawson safely negotiated his final few balls, even that magic seemed to be a delay of the inevitable.

Dawson then clubbed James Fuller to midwicket and even then it looked to be a blip.

So what followed was nothing short of an implosion, Lewis McManus and Chris Wood falling for ducks after holing out, before Alsop followed to give Finn his 99th wicket in the format.

Within 30 minutes Middlesex went from being dead and buried to favourites, especially when Ryan Stevenson sold himself short to be run out, before the deed was done by the champion himself, Dwayne Bravo seeing his compatriot Fidel Edwards hole out to Agar.

Before all of that, Munro had played a wonderful knock, a foot-on-the-throat 58 making a mockery of the home fielding and bowling in a ruthlessness not really seen on these parts. Until tonight. How Munro was on the losing team will be a head-scratcher.

It would have likely been the same for Paul Stirling earlier in the piece, his traditionally lusty 60 from 44 balls a cut above in a batting effort of 165-8. Nobody else scored more than 22.

But that in a nutshell is Middlesex’s T20 kryptonite of recent years. This team, one with the likes of Eoin Morgan and Bravo, sat with one win from five and qualification a near-impossibility had they lost again at Lord’s.

Now they have hope, though cracks have certainly peen papered over with this win.

Run-outs certainly don’t help, with Max Holden, John Simpson and Bravo all falling to that particular fate, while a riled Edwards accounted for Nick Gubbins and Fuller, both bowled with venom.

The hosts too had started with pace, 58 on the board in the seventh over before the first wicket fell, while at 123-4 with five overs to go, a late charge was set with Stirling and his new bat still in play.

The Irishman was to fall just one ball later while Bravo (20 from nine) and Tom Helm (13) struck some lofty blows late on though 165-8 still seemed a touch under par.

That feeling was only exacerbated when misfields and poor bowling saw Hampshire carve their way to 75-0 within six overs. After that? Well that’s anyone’s guess.

But Middlesex are still alive. For now. And the spirit of 2008 lives on.