Edgbaston, any time between 9am and 10.45am on Finals Day. The assembled media engage in chit-chat – ‘who’s your money on, then’?

Without accurate numbers to collate the responses, the majority were backing a Somerset v Lancashire final, with a variety of winners from that duo.

Fast forward to 6.45pm and we were all gearing up for a Worcestershire v Sussex showdown. T20 cricket makes fools of us all.

Those writing off Worcestershire’s chances in their semi-final against Lancashire all did so with a caveat – ‘unless Moeen comes off’.

England’s left-hander is one of those players who possesses and ability to turn a game, primarily with the bat. In truth, he fizzled rather than firing in that semi. His 41 from 21 balls was brisk, classy and powerful. He clubbed 23 from Liam Livingstone’s powerplay over, but fell before he really made the desired impact.

But with the ball he was instrumental in securing their passage to the final. Two for 16 from four overs is sensational by anyone’s standards – especially when one of those included Lancashire’s dangerman Jos Buttler.

Ben Cox was not a player picked out by many as a dangerman before the start of the day. But the keeper-batsman was the hero in both semi-final and final.

Sussex were all that stood in Worcestershire’s way – the Rapids chasing the title on their first ever Finals Day. His unbeaten 55 from just 34 balls posted a total that was beyond Lancashire in the semi-final and he followed it with a quite sensational knock to take his side over the line in the final.

Chasing 158 to win, it was Cox that made the difference. Ali flickered again with a lovely 41 once more – having bowled quite brilliantly to claim 3-30 – helped by Joe Clarke at the top of the order.

But it was Cox, who finished unbeaten in both matches, with 46 from 27 balls who fired the Rapids to the title, dispatching Jofra Archer in the penultimate over to spark brilliant celebrations.

Aside from Cox, the contribution of 20-year-old Pat Brown mustn’t be overlooked. The seamer is the top wicket-taker in the tournament and extended that lead with a mature, skilful display to claim 4-21 in the semi-final and then concede just 15 runs from his four overs in the final.

His variations, his nerve and his consistent ability to produce high-quality deliveries really caught the eye – the breakout star of this year’s Blast without a doubt.

So Moeen did ‘come off’, but in the way many had imagined at the start of the day. Instead it was left to Cox to deliver the decisive innings on this historical day for the Rapids.

And so, how to reflect on Finals Day and indeed the 2018 Vitality Blast as a whole?

Record attendances, stunning weather, some of the most sensational, audacious, breathtaking, nailbiting, exhilarating, magical cricket this format has ever produced across a quite magnificent cricketing summer – all capped off with a typically uplifting showpiece at Edgbaston.

Some would have you believe cricket needs rejuvenating. This competition has laughed in the face of such folly, proving it is so very much alive, kicking, screaming and belting out a bit of Neil Diamond. 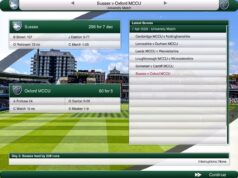