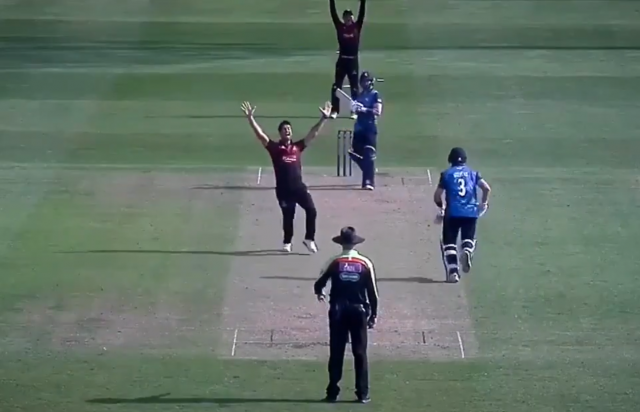 Banton’s 107 was enough to beat Kent – all out for 94 – on its own, with 66* and 5-18 from Overton condemning Kent to back-to-back defeats, felled by former star Sam Northeast and Hampshire in front of the Sky cameras on Wednesday.

Kent were already down four of their key men as news at the toss confirmed skipper Heino Kuhn’s absence through injury and Daniel Bell-Drummond’s absence due to a family bereavement.

Add this to the annoyance of having Joe Denly and Sam Billings carrying drinks for their respective IPL franchises and this was a rather depleted Kent side.

Nonetheless Somerset still had work to do in front of a 5000-strong crowd at the Cooper Associates County Ground even without any current temporary stands, which will appear for the Vitality T20 Blast and World Cup matches later this summer.

A phenomenal effort on a bank holiday for a competition some see as surplus to requirements and of little interest to the paying public.

Banton’s effortless 107 came up off just 79 balls complete with four sixes, before the halfway mark of the home side’s innings. Peter Trego and James Hildreth both contributed scores in the 20s after Azhar Ali (surprisingly opening after the retirement of Johann Myburgh) chopped on for three early on.

It was Somerset’s two captains Tom Abell and Lewis Gregory whose partnership really took the game away from the Spitfires.

Matt Milnes is caught from the bowling of Overton for 5.

Gregory continued his sensational form going way back to last summer against the white ball and Abell continuing to press a late charge to replace Andrew Strauss/Alastair Cook/Haseeb Hameed/any other tried and failed English top order bat of the past decade.

A stand of 73 off 11 overs was ended when Abell was caught Alex Blake bowled Imran Qayyum for 28 and Roelof van der Merwe joined Gregory at the crease. The Dutchman got an early life when a simple return catch was spilled by Harry Podmore before Gregory was incredibly held at short cover by Blake to depart for a very well made 51.

No one else spent too much time at the wicket for Somerset, but Craig Overton batted superbly, striking two sixes into the River Tone on his way to 66 off 36 balls, ending the innings with a real flourish.

The Kent innings was a real damp squib on an otherwise scorching day in the westcountry, the first four wickets fell like a pack of cards, including recent Somerset man Matt Renshaw.

Blake and Adam Rouse put on 37, embarrassingly their highest stand of the match, but they were never up with the rate and eventually whimpered out for 94.

Overton earning the standout figures of 5-18, along with his 66 – leaving Banton hard-done not to get the man-of-the-match accolade. 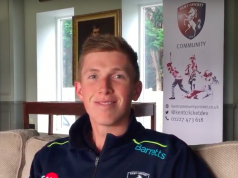