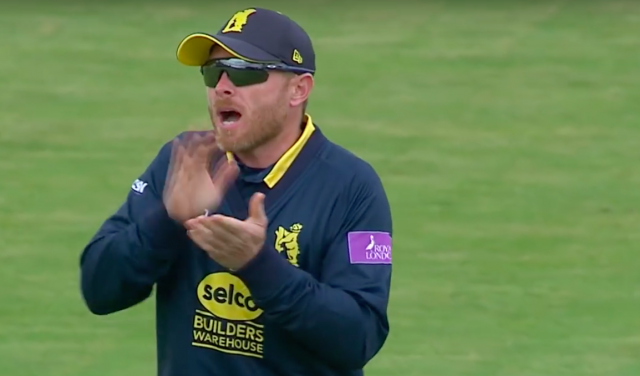 There was a dramatic end to a tight affair at Edgbaston, as Yorkshire managed to bring the scores level at 270-9. The hosts couldn’t quite make it a victory with their impressive bowling on a glorious Good Friday and had to settle for the tie.

Warwickshire’s innings was not off to a dream start as they lost their first wicket, Ed Pollock in the second over bowled by Tim Bresnan for four. Then a second wicket fell in the first 10 overs, as Dom Sibley edged onto his thigh pad before being caught behind for 26, leaving Warwickshire 57-2.

In the early overs, Yorkshire restricted Warwickshire well, especially Steven Patterson who in his first five overs only went for 9 runs.

The Bears kept the scoreboard ticking along, although wickets continued to fall. Through the middle overs, when spinners Adil Rashid and ex-Bear Josh Poysden came on, Warwickshire were pushed back. Rashid bowled Sam Hain for 40, then Liam Banks on his List A debut and returning England international Chris Woakes both lost their wickets to Poysden.

Rhodes, coming in at five, looked to be continuing his great form before he got out, when he just about got a touch of the ball on his glove and was caught behind for 40, breaking a 62 run partnership between himself and Tim Ambrose. This gave the loaned Yorkshire bowler, Matt Pillans the first of his three wickets.

Throughout this, Ambrose stood strong at the crease and played the anchor for Warwickshire, ensuring someone was there to keep the hosts afloat. He scored his 50 off 84 balls, before trying to accelerate his side towards the 300 mark at the concluding stage and finding himself caught off Pillans’ bowling for 77 off 108 balls.

Towards the end of the Warwickshire innings, the run rate did increase, yet wickets still fell for the hosts. Warwickshire concluded on 270-8, and Yorkshire began their chase.

In reply, Yorkshire’s openers both fell in the same fashion within the first five overs, with Henry Brookes sending their stumps cartwheeling out of the ground, leaving Yorkshire 14-2 after 5 overs.

From the collapsed start by Yorkshire, David Willey and Jonathon Tattersall put began to rebuild and guide Yorkshire out of trouble. They reached a 50 partnership in the 20thover, with Yorkshire on 86-4. Although George Panayi put a stop to that partnership by dismissing Willey, as he went to hit a long ball but sent it right into Jeetan Patel’s hands.

It was then the turn of Bresnan to rebuild the innings with Tattersall, and rebuild they did as they made a partnership of 137, both of them bringing up half-centuries. With Yorkshire needing 44 off 5 overs, however, Patel broke the partnership as he clean bowled Tattersall for 79.

In the 45thover, it became an incredibly tight affair. Bresnan departed for 89 off 88 to give Woakes his third wicket of the match, taking Yorkshire to 235-7 after a great grab from Patel.

However, it was not to Warwickshire’s glory. Even though Yorkshire went 9 down – when Pillans departed – with 2 needed to win off the last ball, Poysden sprinted down the wicket to grab a quick single and bring the tie.

It was a cracking game for Good Friday. It was a plentiful Edgbaston crowd watching two very strong sides faces each other with plenty of impressive performances, including those of Ambrose, Patterson, Bresnan and Woakes.

All eyes on Edgbaston tomorrow