In the inaugural final, it was the winners of the South Group who took away bragging rights, despite collapsing from 150/1 to 231 all out, as Diamonds fought back. It turned out to be in vain, however, due to an impressive bowling performance from the winners.

An excellent 80 from tournament’s highest run-scorer, Georgia Adams, and 6 wickets for highest wicket taker, Charlotte Taylor, sealed victory for the Vipers. The Diamonds showed fight, but were bowled out for 193, chasing 232.

Vipers made an unchallenged start, as Adams and Ella McCaughan put on an opening partnership of 100, before the latter was caught behind by Linsey Smith for 35. The next wicket fell 50 runs later, as Maia Boucher, who was playing very positively succumbed to Hollie Armitage’s first ball, hitting one straight to mid off for 28.

That wicket saw Vipers fall from 150/1 to 231 all out, losing 7 wickets for 41 runs in the process. Levick got her first wicket, Charlie Dean out lbw for 2, and Paige Schofield followed to give Armitage her second wicket, out for 3.

Levick continued her spell, taking three wickets overall, picking up the prized wicket of Adams for 80, then trapping Carla Rudd LBW for 1.

The fightback propelled for Diamonds, as Norris was run out for 5, Monaghan caught behind off Langston. Despite Emily Windsor offering some resilience she also was ran out for 37, runs that proved to be crucial.

Jenny Gunn finished off the Vipers’ innings, getting Taylor out, as the winners were all out for 231.

Vipers never let Diamonds get back into the game from then on, taking wickets at regular intervals, despite keeping up with the run-rate. The two openers, Hollie Armitage and Lauren Winfield-Hill put on 36, before Winfield-Hill was caught for 20, bowled Boucher and Armitage caught for 26, to give Charlotte Taylor her first of 6 wickets.

Ami Campbell was run out on a very tight decision without scoring, and next over Alex Macdonald was bowled by Taylor again without troubling the scoreboard.

Taylor got a key wicket of Gunn, out lbw for 9 then got Bess Heath who also went without scoring, caught on the boundary, as Diamonds were reduced to 96/6. Smith was next to fall, trapped LBW by Dean for 9.

Kalis, who battled as wickets fell around her, started to build a partnership with Langston, which reached 49 runs, to give Diamonds a glitter of hope, until Taylor made the breakthrough for her fifth wicket, dismissing Langston lbw for 21.

Kalis passed her half-century, from 72 balls as she began to play some shots. The next ball, however, Taylor got her sixth wicket, with the Dutch batter being caught for 55.

Fittingly, Adams got the final wicket, Graham out for 16, caught on the boundary to wrap up a fantastic victory and fantastic tournament for the Vipers.

Regardless of the result, one thing is for certain: Women’s Cricket has been showcased in a phenomenal way and this may be the start of something very special. 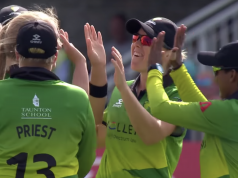 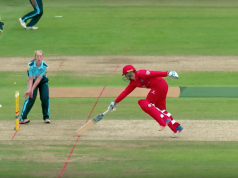 Beaumont swaps keeping in blue for fielding in orange, from Surrey Stars to Southern Vipers