And so Day Three opens with the game as firmly in the balance, as if it had been deposited on a pair of scales by a chick in a blindfold called J. Ustice.

We are 127-4. Travis Head is forcing me to reconsider all the previous dreadful things I’ve said about antipodeans over the years, by still being in on 38 runs. Delray Rawlins is ably supporting him with 22 from 30 balls.

If we can bat most of the day, we can push Nottinghamshire out of this and leave us the best part of a day to bowl them out. On the other hand, if they get the gentle sound of cascading wickets, they’ll have us, well, buggered.

We move along, being very patient and precise. Then we have one of those “eventful” overs.

Ball one: Head unleashes a textbook off drove to Stuart Broad. 4 – Head’s 50 secured.

Ball three: Delray Rawlins fends it back to Broad who gathers.

Head and Ben Brown come together and launch quite the counter attack. We move over 200 and put lead to over the hundred. Which is nice.

Brown survives a pretty tasty looking lbw shout from Fletcher on 35, but it’s waved away. Which is also nice. 231-5.

But we’ve also thrown away better positions than this.

Which we immediately try to do by serving up a nice warm plate of caught and bowled filth to Mohammed Abbas fourth ball after lunch. 249-6.

Abbas is really on it here. David Wiese – that prince of men, that saviour of so many innings – gets got, caught at short leg by Calum Macleod off the Pakistani’s bowling for 7. 260-7.

Broad repeats the trick to Garton, the left hander chipping it to the grateful hands of Steven Mullaney. 265-8.

Broad then follows this up by destroying Mitchell Claydon for pace. Gone lbw and the lanky blonde is on a hat trick. 265-9.

Pleasingly, Head thumps Broad down the ground to bring up his ton. 102 off 171 balls, under the pressure we’ve been under, is a top notch knock.

Will Beer then has the most unlikely knock in the history of the season. His 15 runs take 45 balls and include 3 gloriously struck drives off Abbas and Broad, which have me roaring with laughter.

It can’t last. Broad is not as amused as I am and traps him on the crease. All out for 292.

And so it comes to this:

Ben Duckett and Ben Compton go after us like they can have a day off tomorrow.

We tweak plans and do what we can, but at tea they’re 40 for no wicket and the lead is shaved to 158.

Compton duly follows him into the 50 club. They just keep thumping us. At 162-2, Bopara comes into the attack and has Compton caught behind.

Joe Clarke trots to the wicket. We end Day Three with them chasing 31 to win. The definition of a measly target. 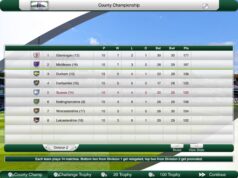