Middlesex conceded a first innings deficit of 117 as Nottinghamshire had by far the better of the second day at Lord’s.

After losing their final wicket within the first over to be bowled out for 298 Notts had to wait 75 minutes for their first breakthrough but from then on it was largely one-way traffic as Middlesex subsided in a manner frustratingly familiar to the club’s supporters.

Collapses happen in April but this one was particularly disappointing because the ball can hardly have been said to have swung round corners. The top three – Nick Gubbins, Nick Compton and Sam Robson – all missed straight delieveries, the former pair both playing down the wrong line and the latter shouldering arms. Up to his rather humiliating dismissal Robson had looked in good form, getting away six boundaries in his 35.

Adam Voges briefly promised a recovery post-lunch but the new Middlesex captain was trapped lbw by Harry Gurney for 29 just as he was starting to show signs of the Sheffield Shield form that got him a place in the Australian Ashes party. Paul Stirling followed him back to the pavilion in the next over, caught in the slips off Jake Ball, leaving James Harris to walk to the crease at what was 107-5 on the scoreboard but really 107-6 with Dawid Malan out of the match with a fractured metacarpal sustained in the field yesterday.

Harris and John Simpson gamely attempted to build a partnership but with so little batting to come they found themselves unable to find even second gear. They occupied the crease for 17.4 overs but put on just 40 runs before Samit Patel got Harris out lbw, the first of three wickets in a spell largely conceived because Notts were well behind the over rate. Tom Helm followed in identical fashion two balls later.

Simpson fell in the first over after tea, caught at slip off Gurney, leaving last pair Tim Murtagh and Steven Finn to hit out in search of a few extra runs. Murtagh took up the challenge with three boundaries but a shot too many saw him caught in the deep to become Patel’s third victim and wrap up the Middlesex innings for 181.

Notts bowled no better than satisfactorily. Gurney, constantly making the batsmen play, and the ever-reliable Vernon Philander were the pick of the bowlers but all but two of the Middlesex wickets can be put down to batting misjudgement rather than outstanding bowling. Will Gidman hardly threatened on his top-flight debut.

“We think it’s a good cricket wicket,” Gurney said at the close. “If you bowl in good areas for long enough and stay patient you get your reward but at the same time as a batter if you knuckle down and stay out there for a while things get a lot easier.”

Given 25 overs to bat before the close Notts raced along 100-2 against an evidently demoralised Middlesex seam attack. However, the openers – Steven Mullaney (bowled by Tom Helm for 44) and Brendan Taylor (caught long-on attempting to hit Murtagh over the top for 34) will have been disappointed to give their wickets away shortly before the close after putting on 77. Tomorrow the aim will be to set up a match-winning declaration but Gurney is not getting ahead of himself.

“First and foremost it will be a case of getting through that first hour,” Gurney said. “If Middlesex come out and bowl well and take two or three wickets then we’re not in a position to set anything. In an ideal world I suppose we’ll be looking to declare at about five-ish and have an hour at them tomorrow with as many runs on the board as possible.”

So early in the season Middlesex will hope that this day is an aberration rather than the poor form from the second half of last summer carrying over into 2015. Either way, they look very likely to open their account with a defeat, extending their winless run to 11 games. It is hard to argue with the many pre-season predictions placing the Londoners as relegation candidates. The overseas player to be announced as a replacement for Voges over the next 24-48 hours is likely to have quite a job on his hands. 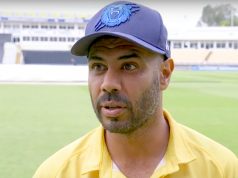 Essex survive follow on to salvage draw at Edgbaston