Sometimes contests can be won in a single frame of action. If it’s a T20, the percentages are even greater. When Ed Barnard failed to collect a throw by Brett D’Oliveira which handed a reprieve to Ateeq Javid, hardly anyone would have wondered about the reverberating effects. It was the 16th over after all and anything could have happened during the rest.

Ultimately, Javid, with the company of a composed Rikki Clarke (52 not out off 43 balls), whacked 22 off 10 deliveries to all but guarantee the reigning champions and North Group leaders Birmingham Bears a place in the quarter finals. The game had been sold-out one week in advance and the anticipation of a jaw-dropper between the top two sides didn’t fail to materialise.

It wasn’t the big names which made the highlights though. Joe Leach followed the footprints of Mitchell Starc and Steven Finn to rearrange the stumps of Brendon McCullum early on. A target of 161, set by Rapids after being put into bat was largely thanks to fine half centuries by D’Oliveira and Tom Kohler-Cadmore.

Bears stuttered losing Varun Chopra, Tom Lewis and Jeetan Patel but Clarke assessed the situation to fine rewards. Laurie Evans lend an ear to Clarke’s management skills and after being at crossroads at 48/4 during the Powerplay, they set the game up by frequent singles and the occasional boundary. Evans (35 off 31 balls) crashed Saeed Ajmal for two boundaries, which included a straight swat that ended in the nearby parking lot, after narrowing down the target to 57 off the final five overs.

Saeed Ajmal got back deceiving Evans in the flight, who mistimed a drive which ended in Tom Kohler-Cadmore’s hands. Cadmore had earlier played a blinder (66 off 51 balls) after the first ball dismissal of in-form captain Daryl Mitchell. Last week’s hero Richard Oliver never got going and at the end was castled by Josh Poysden, who returned respectable figures of 4-0-20-2.

The endorsement of Worcestershire’s academy was in full flight when D’Oliveira joined Cadmore in the middle. It was a crucial juncture where Colin Munro lost the battle with his fellow countryman Jeetan Patel, who had him stumped for 8.

Cadmore fell to Poysden after adding 35 runs with Oliveira but the latter carried on, playing inventive strokes coupled with a sense of intelligence which had been lacking in his game before. The sluggish surface made it hard to time the ball but Oliveira had the beat figured out and landed four sixes.

Bears owned as much to Javid’s hitting as well as Clarke’s savoir faire in reaching the target. That’s six wins out of seven games for the Bears over Pears now. They certainly have the number of the West Midlands Derby. 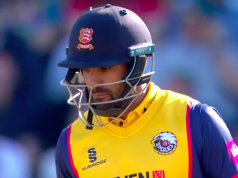