More than just news, this week’s Friday Five brings you a couple of England defeats, Yorkshire bashing, Derbyshire fandom, Steve Smith worship, Donald Bradman adoration, the questionable joy that is fifty over cricket, a thinly veiled NatWest Blast prediction and a shameless plug for a friend. No mascots were harmed in the making of this post.

#MyAshesSummer Australia won the second Test. I mean, Australia really and totally won. Steve Smith and Chris Rogers both got centuries; Mitchell Johnson silenced his critics (again) and, in their only really poor moment, the Aussies allowed a Notts bowler to top score in the second innings. By now you’d think the England selectors would realise the flaw in their policy of selecting players for no other reason than that they play for Yorkshire but, sadly, it appears not. They’ve replaced Gary Ballance with Johnny Bairstow for the third Test. Never mind, England fans: just three more Tests and it will all be over.

#WomensAshes if you were looking for some consolation from the female version of the competition, Englanders, I’m sorry to say your women’s team is following their male counterparts. On Thursday, the Australian women largely outplayed Charlotte Edwards’ side and took victory in the second women’s Ashes match. On a positive note, there were more 3000 people watching a women’s international cricket match. Does it matter who won when we are seeing crowd figures like that? Actually, yes it does. Australia won.

#RLODC with the excitement of the Ashes and the last few rounds of the NatWest T20 blast, you can be forgiven for not realising that the Royal London One-Day Cup Starts this weekend. And that would be fair, since a fifty over game lacks both the drama of Test cricket and the excitement of T20 cricket. For those who enjoy watching twenty to thirty overs then falling asleep in the sun with your beer dribbling in your lap because it just goes on way too long, the RLODC is here again. Don’t let me put you off, though. Have a read of our previews here.

#NatwestT20Blast we are getting to the end of the group stage of the T20 competition and will soon know for certain who all the quarter finalists are and where they’ll be playing and all that business. Derbyshire Falcons are out so I’m not that interested anymore, but I would like to see Leicestershire beat Notts tonight just for giggles. Let’s be honest, however much fun it is to watch a T20 match we all know Birmingham are probably going to win the tournament again. We non-Warwickshire folk must hold our heads high and take small victories along the way. Come on Foxes!

#CountyCricket The tour match between Derbyshire and the Australians is something of a tradition, always enjoyed by the locals and dating as far back as the Invincibles tour of 1948, when the great Don Bradman played here. In honour of this the Derbyshire CCC bookshop, whose proceeds are ploughed back into the Cricket Derbyshire Academy, will be auctioning off a menu card signed by the great man. In other county cricket news, Harry Gurney hammered Sussex and helped put them in danger of relegation, Yorkshire won again, Jonny Bairstow was above average, Derbyshire signed Tom Milnes on a one month loan from Warwickshire and Leicestershire’s Matt Boyce retired from cricket so that he can become a banker.

Finally, for cricket lovers everywhere in Britain, a shout out to my good friend Jarrod Kimber whose film Death of a Gentleman is about to hit cinemas across the country. For a list of dates and places, go here – I hope I’ll see some of you at Nottingham Broadway. 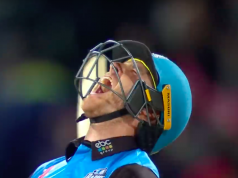