Northamptonshire head coach David Ripley is confident his side can beat anybody in the Natwest t20 Blast quarter-finals, as the Steelbacks look to recreate memories of 2013 where they shocked everyone to walk away with the trophy at Edgbaston.

Ripley’s men secured their place in the last eight after their home clash with Durham was washed out without a ball being bowled on a miserable Friday evening at Wantage Road, although they will be on the road to Sussex in the last eight.

The Steelbacks lost their first three games of the competition but a remarkable turnaround saw them only lose a further two, with seven wins from 11 enough to take them through to the knock out stages.

Despite the slightly anticlimactic way their progression was secured, Ripley wasn’t bothered and believes his side had proved over the 14 games that they were more than deserving of their third place in the North group.

“After losing our first three games I think we’ve done really well, we’ve played some good cricket and got on a bit of a role at the right time,” he said. “I’m glad the gods have looked down on us today.

“I still think we’d have won this game but I’ll take this all day long, it’s good to look forward to that quarter and it sets us up nicely for the 50 over competition starting tomorrow.

“If you play 14 games I’m sure every team can look back on a bit of bad luck here or something went in their favour there, but it’s a fairly long campaign and if you’re in the top four, and we’re not there on run-rate, we’re there on points, we deserve our quarter final play and we’ve going to look forward to it.

“Whoever you play, home advantage is going to be important to them, we would liked to have been at home but we’ve won games on the road, we feel we’re playing some good cricket and we’ll turn up there very confident whoever we play we think we can go and win.

Memories of two years ago are still fresh in Ripley’s mind, with the coach describing it as his best day in the sport, either as a player or coach as Northants dismantled both Essex and Surrey to walk away with the title.

With the bulk of that squad still at the club, only Cameron White, Matt Spriegel and James Middlebrook from the final team having left, Ripley said that experience will stand his young team in good stead both in the quarter final and if they were to make it back to Edgbaston.

“They’ll always be there because it was such a phenomenal season and such a great thing to share with the group in the dressing room, I get hairs on the back of my neck when I think about it, it was my best day in cricket by a country mile and it would be nice to think we can go back there and recreate that.

“It might never be the same as it took so long to win that trophy, 21 years we had to wait for it, it was really special but I think the experience for a lot of the players who were involved on that day will stand us in good stead if we get there.

History will be against Northants however when they make the trip to Hove, with the county having played away from home in the quarter final stages on three occasions and losing heavily in all three, to Nottinghamshire in 2006, Essex in 2008 and most recently Somerset in 2010, however Ripley believes his side has plenty of potential match winners.

“I’m confident we can go there and win, no doubt about it, we’ve got enough match winners in our side, they’ll be debating our match winners as much as we’re debating theirs.” 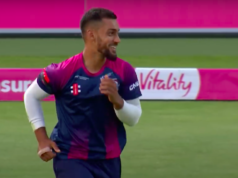