If the Ashes Test gave a sense of pride to the Glamorgan faithful this summer, then their side’s on-field performances left them with much to grumble about. From player retirements, injuries, and pitch debacles, 2015 was very a difficult year for Glamorgan. Thank goodness for the Ashes!

A pre-season clear out that led to a first team squad of less than 20 full time players gave early warning that perhaps this year was always going to be a struggle for a county with one of the smallest rosters on the circuit.

It is best to start with Glamorgan’s limited overs campaigns, as this is where they would have expected the most success. However, after narrowly missing out on T20 Finals Day in 2014, this season saw the Welsh side struggle and ultimately fail to progress from their group.

Their poor home form was a particular disappointment as they slipped to five defeats from their seven matches. There were a few bright spots however as Jacques Rudolph once again led from the front as he picked up 461 runs at an average in excess of 40 including a rare century.

With the ball, far too much was left up to the veteran trio of Dean Cosker, Michael Hogan and Graham Wagg, as they picked up 45 of Glamorgan’s 79 wickets in the Blast.

Following on from the disappointment of the T20 Blast campaign, their forays into the RLODC were equally as disappointing as the side once again struggled to put together consistent performances.

It is of course impossible to talk of the RLODC without mentioning the abandoned match against Hampshire at The SSE SWALEC. In what Hugh Morris described as a ‘dark day for the club’, the match was abandoned after Hampshire batsmen Jimmy Adams was struck on the head from a length delivery by Hogan. The farce that ensued left a bitter taste in the mouth for all concerned, not least the spectators in the ground and those watching live on Sky Sports. As a result, head groundsman Keith Exton lost his job and the club was once again fighting a PR storm.

Results on the pitch were poor, but the fine for the Hampshire match as well as a delayed points deduction for a poor pitch last season made qualification a distant dream. A century for Colin Ingram in a victory against Essex was very much the sole highlight of a torturous campaign.

Thankfully, at least for the first half of the season, there was genuine optimism around Sophia Gardens, as the side went unbeaten in the opening nine matches of the LVCC season; a remarkable run from one of the sides that many expected to see struggle to avoid the wooden spoon. Admittedly, these matches contained their fair share of draws, but at the halfway stage Glamorgan were very much in the promotion hunt and hard on the heels of Lancashire and Surrey.

The early season’s pitches helped Glamorgan’s three-pronged seam attack that prospered in the early part of the season, as Wagg, Hogan and Craig Meschede bowled the bulk of the overs and helped lift Glamorgan’s promotion ambitions.

Unfortunately as the limited overs competitions took hold, Glamorgan’s four-day form struggled too. A defeat to Essex was followed by an absolute shellacking at the hands of Lancashire at Colwyn Bay to put a realistic end to dreams of a top two finish.

Whilst many of the senior players did take responsibility at different times of the season this year, Graham Wagg enjoyed a somewhat golden summer – as much with the bat as with the ball. His 842 runs in the LVCC made him the third highest run scorer in the side, not to mention his 45 wickets. His starring moment came in a superb four-day victory at the Oval, as he struck his way to a career-best 200 at nearly a run-a-ball. He rarely missed a game, and as anybody who has met him will attest, he certainly has a touch of white line fever; woe betide the player who upsets Wagg on the pitch. A leader on and off the field for the club, and deserving of his player of the year title.

Aneurin Donald has long been one to watch at 19 years of age, and this summer he has started to showcase his talents at first team level. His is also highly regarded by higher powers; as he was selected as captain of the England Under-19’s limited overs side this year. A classical batsman with all the modern tricks, Donald clearly has the potential to succeed at the highest level. He narrowly missed out on a maiden century against Gloucestershire in the final match of the season, but it is surely only a matter of time.

After what felt like a breakthrough season last year when he passed 1000 Championship runs, Will Bragg had endured a poor year. His 23 Championship innings realising just 588 runs at an average in the mid-20s is a below par return. But when you factor in his two hundreds during this period, it begins to make sorry reading as to his consistency this season. He was equally underwhelming in white ball cricket, averaging 22 and six in the RLODC and T20 Blast respectively.

It may be a harsh assessment on the current crop of players, but put simply, Glamorgan need to recruit at least three proven performers for next season. Certainly a frontline seamer, and then two batsmen with one being able to open would be ideal. More responsibility will be passed onto Cooke, Donald and Lloyd in the middle order and they will need time to flourish. In limited overs cricket, the side simply needs to return to the 2014 model. Scrap for every run in the field. Lead from the front with the bat. Strangle with the ball.

They need to become greater than the sum of their parts once again.

A year of highs and lows on and off the pitch for the lone Welsh County in 2015. The goodwill from the Ashes has somewhat distracted from on-field performances this year, but I doubt the supporters will be so forgiving come next April. A good run in the Championship was overshadowed by continuing limited overs inconsistency. 5/10 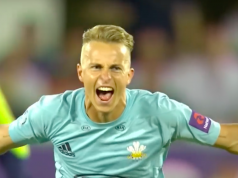