The first County Championship match of the new season brought mixed fortunes for Nottinghamshire. On the pitch, they could hardly have dreamt of a better start, racking up 24 points with a win over Division One new boys Surrey. Off it though, the club had to deal with the dreadful news that batsman James Taylor had been forced to retire and cut short his blossoming career due to a life-threatening heart condition.

But, as they say, the show must go on and their victory over Surrey sent out a significant statement to the rest of the Division that Notts intend to be real challengers for the Division One crown.

They will now set their sights on another top flight newcomer as the leaders of the fledgling table head to Old Trafford to take on Lancashire. Ashley Giles’ men are determined to make a better fist of Division One than they have of late. Since winning the title in 2011, the Red Rose have suffered two relegations from the top flight.

Lancashire have lost a significant chunk of experience from the side that clambered out of Division Two last season, with Ashwell Prince retiring and Paul Horton being allowed to join Leicestershire. They are choosing to place great faith in their emerging crop of youngsters and are keen to test themselves at the top level of the county game.
If they are to achieve their aim of survival this season, a good start to the campaign will be crucial – a fact that is not lost on Giles who is relishing the challenge that they are facing.

“We need to try and start this summer well and even if we’re not banging out victories we need to become difficult to beat,” Giles said at the pre-season media day.

“The start is important. We play two games in the first four rounds which isn’t great. It will make the mid to end of season very busy.

“In terms of taking on first division sides, that’s exciting because we did alright last year.

“We often talk about not being quite right here or there but it’s not something we didn’t know. We’ve got a lot of young lads who lack first division experience but you only get that by having a crack at it.

“I think we are all aware that Division One is going to be tough.”

Both sides will benefit in the first few weeks of the season from the availability of their England players. This match throws up the fascinating clash between England’s top two Test bowlers James Anderson and Stuart Broad.
Lancashire’s Anderson is relishing the battle but revealed the pair have made a pact.

“Me and Broady are the stage of bowlers union not bouncing each other,” Anderson said.

“It’s always good fun. It makes it more interesting and a bit spicier when you’re playing against someone you get on well with. I am looking forward to it.”

The departure of Prince and Horton means Lancashire have lost experience but also runs. Prince was Division Two’s top runs scorer by a country mile, amassing 1478 runs at an average of 67.18. Horton also averaged 37.63 over his First Class career at Old Trafford, so Lancashire need to find a significant chunk of runs. Much onus for that will be on Alviro Petersen. The South African racked up 861 runs last season at an average of 43.05. On the face of it that’s a solid return, but when you consider he scored 286 in one innings and hit two other centuries, there were an awful lot of failures. Lancashire need him to deliver more this season.

The head-to-head contest between James Anderson and Nottinghamshire’s Stuart Broad will be a fascinating subplot. It’s not often the counties get to see their England stars and Notts will be hoping for Broad to show his pedigree on a pitch he should enjoy at Old Trafford. Broad will slot into the Notts bowling unit that performed well against Surrey and, alongside Jackson Bird and Jake Ball, Broad’s inclusion completes an impressive seam attack.

Lancashire are set to hand New Zealand left-arm Test seamer Neil Wagner his first start for the county, alongside fellow Test bowlers Anderson, Kyle Jarvis and Simon Kerrigan to complete an impressive bowling unit. Giles has confirmed that Karl Brown will open the batting alongside 19-year-old Haseeb Hameed. There are middle order places up for grabs with the likes of Liam Livingstone, Luke Procter and Luis Reece contending for a spot.

They say you should never change a winning team, but Notts are unlikely to pass up the rare opportunity to field Broad, meaning one bowler will miss out from the Surrey victory. Harry Gurney or Brett Hutton are the two men most likely to be omitted.

Steven Mullaney will again open the batting, looking to build on his first innings century at Trent Bridge, while Michael Lumb will be hoping for a stronger showing at number three.

Weather and Conditions
The game is set to be mainly fine, though cloudy throughout the match, with the chance of the odd scattered shower. Old Trafford is generally a good pitch with plenty of bounce and carry so that will offer some assistance for the spinners as the game goes on. 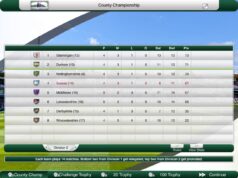