After a hard fought day’s cricket on the third day at the Brightside Ground, Northamptonshire closed on 120/3 after 42 overs, 122 runs behind Gloucestershire and with a battle on their hands if they are to prevent the home side from recording their second successive Championship victory.

The day belonged to the two overseas players: Gloucestershire’s talisman Australian Michael Klinger, in his first Championship innings of the summer since returning to Nevil Road. He hit a high class 140 which helped his side to a 242 first innings lead. For Northamptonshire Sri Lankan leg- spinner Keessuge Prasanna, who apparently speaks no English, bagged an excellent 5/97 on his Championship debut.

Gloucestershire resumed on their overnight score of 240/4 with Michael Klinger 62 not out. They soon lost George Hankins, bowled by Ben Sanderson in the fourth over with the new ball for 2.

Klinger and Kieran Noema-Barnett made steady progress against some disciplined Northamptonshire bowling until the New Zealander, on 23, lost patience and skied a top-edge to stand-in wicketkeeper Ben Duckett, deputising for the injured Adam Rossington. He was Prasanna’s second victim.

Some typically spirited blows saw Jack Taylor quickly move to 25 before he too fell to Prasanna, again caught by Duckett. Duckett’s purple patch continued as Craig Miles went for a duck, caught behind off Richard Gleeson. All this as Klinger looked on. He batted with great care all morning adding just 37 to his overnight 62 to go to 99 at lunch with Gloucestershire on 333/8, a lead of 157.

Klinger’s 100 came off the first over after lunch in incongruous fashion, given that it was compiled in 225 balls. He smashed Prasanna down the ground for six. It was his 26th first- class century with 12 fours and two sixes.

After his wonderful summer of 2015 it’s perhaps too much to expect that he can do the same again, but here he simply carried on in the same manner in which he left Nevil Road last year, watching each ball with great care as if it were about to explode before deciding which shot to play. This was Klinger the accountant rather than Klinger the entertainer but whatever role he plays he is of immense value to Gloucestershire, for whom he has such affection.

David Payne continued his good batting form with a useful 32 before Duckett and Prasanna combined again, this time for a stumping to give the leg-spinner his fourth wicket with Gloucestershire on 407/9. Prasanna achieved a well deserved 5 for with the creditable figures of 5/97 from 27 overs when he bowled Klinger to wrap up the Gloucestershire innings on 418.

Stand out bowler though Prasanna was, all the Northamptonshire bowlers deserve praise for keeping the home side down to just over 3 per over; Sanderson (2/72 from 28 overs] and Gleeson (3/94 from 34 overs), with only a handful of Championship games between them, bowling with good control.

The visitors began their pursuit of 242 to make Gloucestershire bat again in the worst possible fashion, Duckett spooning a simple catch to mid-on from Miles. Miles and Payne bowled good opening spells but it was Kieran Noema-Barnett who took the second wicket, trapping skipper Alex Wakely for 14 on 28.

Rob Newton and Rob Keogh dug in and put up dogged resistance putting on 71 for the third wicket until Jack Taylor’s off spin accounted for Keogh, well caught at short leg by Hankins for 30.

Newton continued to complete his half-century. He was not out 58 at the close with Richard Levi unbeaten on 9. But Northamptonshire will know there is a lot more work to do tomorrow if they are to avoid their second Championship defeat of the season. 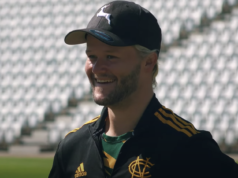