The Natwest T20 Blast kicks off in the North Group with East Midlands meets West Midlands, as Nottinghamshire Outlaws play host to the Birmingham Bears. The two counties met earlier this week in the Specsavers County Championship, where the visitors took victory despite Samit Patel’s efforts for Notts.

Since first facing each other in the T20 format in 2010, the Outlaws have come out on top in five of their eight meetings. Notts, however, have only been to Finals day once and have never won the competition while the Bears have appeared at the final event twice and have one title to their name.

The hosts have been almost-but-not-quites in the T20 competition for a few years and the Bears, who were semi-finalists last year, will be preparing a side that is hungry for success. The Outlaws have a vastly experienced side, led this year by experienced T20 campaigner Dan Christian, and look very strong on paper.

The Bears side is a more of a mix of youngsters and experience, and their finals day last year was less than inspiring, but Ian Bell and Varun Chopra have had a fantastic start to the season and with bowlers like Rikke Clarke and Recordo Gordon in the side the visitors cannot be counted out.

Nottinghamshire could be early tournament favourites and Birmingham will need to be at their very best, but this is T20 where a little luck can go a long way, and anything can happen.

His double wicket maiden may have been a decade ago, but Samit Patel remains a valuable commodity for Notts. An excellent middle order batter and a solid spinner, Patel can be a game changer. This was not the case earlier this week against Warwickshire, although not for lack of trying on his part, but Patel averaged a solid 38 in the 2015 competition, including a 90* in the defeat at Headingley. Able to keep a cool head when the pressure is on and very capable of taking wickets when necessary, Patel could prove important again tonight.

Bowler Recordo Gordon had an excellent tournament for the Bears last year, taking 21 wickets in total and finishing the season the highest wicket taker for the Bears. His achievements in the 2015 competition include taking 3 wickets against Yorkshire and 4–20 against the champions Lancashire. A pacey bowler who can be useful at the death, if Gordon fires tonight he might be just what the Bears need to move those Notts batters.

Nottingham is expecting rain in the late afternoon, which hopefully won’t delay the match much or at all. The temperature should be mild, nevertheless. 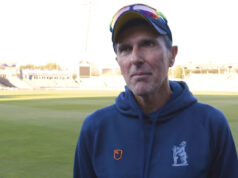 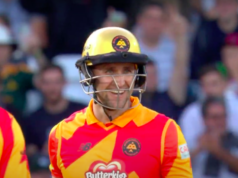