When I wrote the corresponding review a year ago, I was able to share the glory of Middlesex’s exciting last day triumph in the County Championship. This year is very different. We’re talking four-day relegation as well as failure in the two white ball competitions.

Middlesex supporters began the season full of positive thoughts. I was surely not alone in stating, in my season preview, that the County Championship holders would at the very least make a decent defence of their title.

Oh, well, as the novelist Charlotte Mendelson said recently: “there’s nothing wrong with optimism so long as you don’t get your hopes up.”

When Middlesex came close to comprehensively beating Essex at Lord’s in April, few could have predicted their subsequent trajectories. By the time of the final matches, Essex were runaway Champions and, at the other end of the table, Middlesex were in a death struggle with Hampshire and with their opponents, Somerset. Defeat in that match, on a spinners’ pitch at Taunton, was enough to leave Middlesex in seventh place and send them down.

Whilst that defeat still rankles with supporters, it may well be that the capitulation to Warwickshire at Lord’s in August, gifting the Bears their only 4-day win of the season, was the most disappointing effort.

Just three wins in 14 games in the Championship, with four defeats, left Middlesex an agonising one point adrift of sixth place Somerset and two points shy of Yorkshire and Hampshire.

Which takes us, of course, to the small matter of the two-point deduction for a slow over rate in the match at the Oval in August, when the match was curtailed, bizarrely, by an arrow fired onto the square.

Middlesex argued in an initial appeal, turned down by the ECB, that the abandonment deprived them of the opportunity to improve their over rate and thus avoid a penalty.

Now that relegation looms Middlesex have renewed their appeal and so, for the second season in a row, a relegation place will be decided in an ECB committee room rather than on the pitch.

If Middlesex’s relegation is confirmed, one of the big beasts of the Championship will have gone down whilst a relative minnow in Somerset will survive. So maybe the would-be Robin Hood who fired the arrow was, in his or her weird way, robbing the rich to give to the (relatively) poor.

Even if the appeal succeeds, the disappointment at sub-standard performances will remain. No-one averaged 40 with the bat, though Sam Robson and Adam Voges came close. Nick Compton, Nick Gubbins and James Franklin all failed to deliver, with averages in the mid to low twenties.

With the ball, the triumvirate of Toby Roland-Jones, Tim Murtagh and Ollie Rayner took a combined total of 148 wickets in 2016. This year, their total was down to 84.

No supporters will have begrudged Roland-Jones his England recognition, but it limited him to just nine Championship appearances. Murtagh remained pretty effective, but Rayner fell away with just 20 wickets at approaching 40 apiece.

The Middlesex performances in white ball cricket provided no relief from the prevailing gloom.

One from bottom in the South Group of the Royal London One Day Cup left Middlesex well short of qualifying for the knockout stages. It is true that they suffered two no-results; but their two wins were just not good enough.

Adam Voges and the ever-reliable John Simpson batted consistently, and Nick Gubbins had his one day of real success with a hundred in a Duckworth/Lewis win over Hampshire. With the ball, only Roland-Jones – with 11 – took more than six wickets.

In the T20 Blast, it was another tale of woe. Seventh place out of nine in the South Group meant that Middlesex failed to progress to the quarterfinals. There were five wins and seven defeats plus two no-results.

There were plenty of decent innings played, but no-one showed outstanding form with the bat.

Tim Southee, Tim Helm, Nick Sowter and Steven Finn took 64 wickets between them. But overall, the consistency was just not there. Brendon McCullum played one exceptional innings of 88 in just 51 balls against Kent, but otherwise disappointed.

Player of the season:

In a season that was short of outstanding performances, maybe it is best to reward quiet consistency. John Simpson, across 35 matches in three competitions, scored 1062 runs. Behind the stumps, he claimed 74 victims.

Overall, that is another good season’s work.

There were few contenders for breakthrough players of the season. The only man deserving of this award is 23-year-old pace bowler Tom Helm, who took 19 T20 Blast wickets at a cost of just 15.89.

After a few false starts to his career, including a stress fracture of the back and an ankle injury, Helm looks to have leap-frogged a few other pace bowlers and should start next season with the prospect of a place in all competitions.

Could have done better:

The 2017 season was a disappointing one for Nick Gubbins. He started the season on the England radar, as the international selectors were casting around for an opening partner for Alastair Cook. He ended it on the injured list after damaging his hamstring in August.

Aside from that One-day Cup hundred already mentioned, Gubbins had a generally miserable time with the bat. His brief venture into the T20 Blast was a failure, and he managed just 314 runs in seven Championship appearances.

It is a tribute to the promise he had shown previously that, up to the time of his injury, he was still being tipped by some – including Nasser Hussain – as a potential winter Ashes pick.

Not yet 24, he still has time to make it on the international stage. Many have been tried as England openers and many have failed. Who knows, it could soon be Gubbins’ turn.

Need to work on:

Whilst the disappointment with the Championship performances is still a raw and open wound, the truth is that Middlesex’s one-day efforts have, for a while now, been little short of a disgrace for a major county.

Since winning the T20 competition in 2008, Middlesex have only progressed once to the quarter finals.

The decision to bring in Daniel Vettori to coach the T20 team showed no visible dividends. Maybe the benefits of his experience will show through next year. By one means or another, however, Middlesex need to deliver something in one or both of the one-day competitions – and soon!

It will hardly help that Ryan Higgins, who played at least one thrilling T20 innings in 2017, is set to join Gloucestershire.

The need is obvious. Supporters will wait to see how the club will seek to meet the need.

The most immediate event will be the outcome of Middlesex’s appeal against their two-point penalty. If successful, presumably relegation will be reversed and everyone in NW8 will breathe a sigh of relief.

Whatever the outcome, there is much planning to be done before next April. Talks of dissension in the dressing room have been denied by Angus Fraser – where is Mandy Rice-Davies when you need her to deliver her most famous quote? In any event, allegedly the players met after the season’s end and resolved collectively to put things right next season. We shall see.

The best that can be said for the season is that, with just three more points, the team would have achieved a position in the top half of the Championship. That would still have left them 99 points behind champions Essex so as a defence of their title, it would still have represented failure.

The second best that can be said is that, maybe, if Middlesex had won two no-result matches in the One-day Cup, they might just have qualified for the knockout stages. But then again, if my granny had had wheels, she could have been a motorbike.

Durham edges rain-hit thriller against Middlesex in One Day Cup. 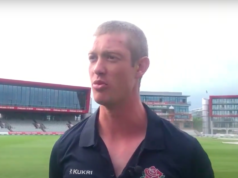