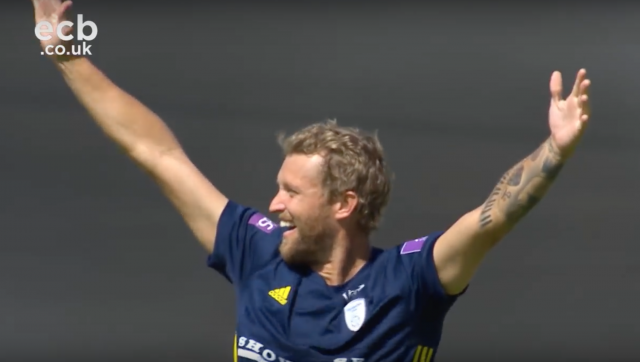 High atop the Mound Stand sits a mainstay of Lord’s, a part of the ground’s history and makeup. Save for the occasional lightning strike or wind damage, it is always there to watch over cricket on the hallowed turf.

Father Time, the weathervane donated to the ground by Sir Herbert Baker, has stood since 1926 and, on Saturday, will preside over another white-ball final. This will be the second time it observes a final between Hampshire and Kent; the previous came in Hampshire’s 1992 victory.

It is symbolic. For Gareth Berg, it could become even more so on Saturday. The 37-year-old has a number of tattoos, including one to memorialise hitting the winning runs for Middlesex against Leicestershire in 2011, a victory that saw the club win Division Two.

“Always an excuse to get some more ink,” Berg says when asked if he might get another tattoo if he repeats that feat in the final. “Maybe Father Time on the back or something like that to remind me of the Lord’s final.”

It would have a nice dual meaning. Berg recently had his third child and has links to Lord’s that go back a decade. He was signed by Middlesex in 2007 at the age of 26 — after failing to break out of the Northamptonshire 2nd XI during a short spell in 2004 — and made his debut the following season.

Berg scored 3,018 runs and took 85 wickets for Middlesex at Lord’s before a shoulder injury saw him play just one game in 2014. Hampshire chose to sign him and the decision has since paid dividends. Berg became an instant fan favourite and has proven himself invaluable with both bat and ball.

“Contributing in any of those two [disciplines] is very important for me and for the team, so if I come off the field having contributed I’ve done my job for the team.

“I’d like to think I’ve repaid some of it already over the past three years by staying on the park. The rest is all up to finals days and trying to win trophies for the team.”

This won’t be his first trip back to Lord’s: he’s been there twice with Hampshire, first in the County Championship in 2015 and last year in the T20 Blast. Berg, unsurprisingly, speaks kindly of the ground where he made his name.

“It’s exciting to go back to Lord’s. It’s a great ground, great atmosphere there, usually in these sorts of occasions.

“My first five-fer and my first hundred came at Lord’s for Middlesex, but I also remember fondly playing against the Rajasthan Royals in an exhibition game and hitting Shane Warne for 13 in one over, one big six, and I’ve got fond memories of the place.

Curiously, despite ten years in county cricket, this will be his first Lord’s final. He does, however, have one appearance at Finals Day — although that was last season, in Hampshire’s semi-final defeat to Nottinghamshire — giving him at least some experience of such a grand occasion.

“I’m excited,” he says. “I’ve played every game in the competition so far so I’m looking forward to the challenge.”

The term used in the county contingent to describe Berg would be ‘handy’. He has ten wickets in the One-Day Cup this season and a pair of half-centuries, one of which —  an unbeaten 52 at Glamorgan — saw him hit the winning runs to earn Hampshire qualification to the knockout stage.

It might not have been this way. As he reflects briefly on the season, Berg acknowledges that he could soon give up one of the three formats to prolong his career, and that he almost didn’t play in this year’s One-Day Cup.

“I had a talk with [head coach] Craig White just before the first game against Sussex, that possibly the 50-over competition I’d have to leave out but then I went and had a good knock (65 from 37 balls) the next day.

“Next season we’ll see where we’re at. I’m hoping to hit around 40 and we’ll see where we are there but the older I get I might have to eliminate one of the formats. I’m not prepared as yet to give up any format but we’ll see how things [play out].”

He still has two more full seasons to play before reaching the big four-zero and, despite his injuries, it is within the realms of possibility. After all, Darren Stevens — who Berg will play against on Saturday — remains in the game at 42 while Shivnarine Chanderpaul, at Lancashire, will be 44 in August. He, in fairness, only plays red-ball cricket for them.

“As opposed to the Middlesex career I’ve almost taken a more laid back approach to my cricket,” Berg claims. “The guys work you hard fitness-wise in the winter but I’ve managed to find a happy medium between working too hard and being too laid back.”

That happy medium could, on Saturday, help him through the pressure of a Lord’s final and Hampshire to a white-ball trophy.