Jason Roy was delighted to be back playing at The Oval in front of his home crowd, but the England international admitted being “pretty nervous” walking out to bat with his esteemed opening partner Aaron Finch.

Dovetail does not seem an appropriate word to describe the bludgeoning batting of Finch and Roy, but they do dovetail each other outstandingly well!

“It was a lot of fun! Roy said. “We started really well with the ball, and then everything just fell into place from there.

“We kept them to a respectable total that we knew we could chase down if we got off to a good start. Of course, we did, the pitch was good, so yeah credit to the bowlers tonight!

“Tom Curran is a wicket-taker, a strike bowler and a very smart bowler which he has shown when he has bowled in international colours.”

And Roy was full of praise for his opening partner Finch, who continued his superb form with a destructive 43 from just 21 balls.

“Finch is clearly a world-class player, he’s come into this tournament with a lot of confidence, this has been reflected in his consistency. He’s obviously the number one batsman in the world for a reason, he’s shown us again tonight why he is.”

Roy has grown up in the world of shortened-sports, hence his quite modern approach to shortening cricket more and more so. T10s clearly suit his batting:

“It was nice to have a little glimpse of a T10, like they’ve been trying out in the UAE which I’ve been involved with. It’s pretty exciting. You’re in and out, it’s good for the crowd with a lot of sixes and wickets – it’s good fun!

“You have to adapt your game a bit because you don’t really go down the gears, you have to start in top gear and then have to keep going and keep your run rate up.” 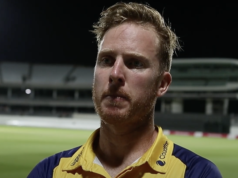