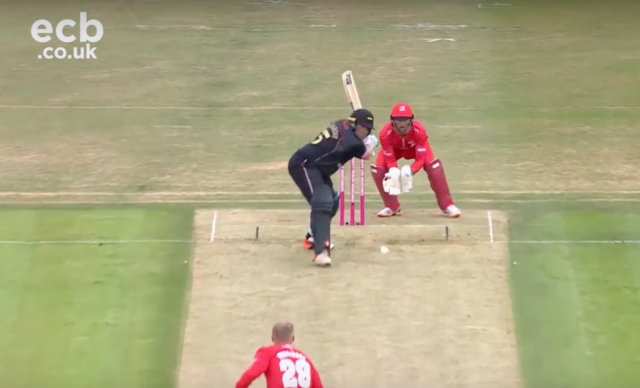 It was a day of truly great individual innings in the T20 double-header at Old Trafford. As night fell it was Afghanistan international Mohammad Nabi who lit up the men’s match after Indian Smriti Mandhana has produced a marvellous innings in the Kia Super League during the afternoon.

Ultimately it meant defeat for both Lancashire sides, neither of whom were able to defend what appeared pretty good totals. And each of the four innings throughout the day had been spearheaded by one fantastic knock.

Let’s begin with the Lightning who won the toss and decided to bat first in the evening game. Alex Davies quickly set about dominating proceedings.

The diminutive opener shared a blistering opening partnership with Karl Brown and the pair raced to 52 inside four overs before Brown and then Arron Lilley fell to Zak Chappell.

Davies brought up his own half-century from just 28 balls – his fourth fifty of the season and he went on to beat his best T20 score that was set earlier in this years Blast.

A fifty stand with Josh Bohannon kept up Lancashire’s momentum and Davies continued to march on.

He went on to become only the third Lancashire batsman to carry his bat in T20 cricket, there at the end unbeaten on 94 from just 56 balls. Lancashire’s total of 190-5 would, it seemed, be enough.

Especially when Leicestershire were reduced to 18-3 after three overs. Steven Croft, Toby Lester and Mark Watt – on his first-team debut – with the wickets.

A 77-run stand between Ben Raine and Colin Ackermann brought Leicestershire back into the game but two wickets in successive balls from Matt Parkinson looked to have clawed back control for the Lightning.

At 96-5 with eight overs remaining, Nabi began to take charge. It was a truly brutal innings from the Afghan, depositing spinners and seamers alike into the Old Trafford stands.

By the time his onslaught had taken Leicestershire to victory, he’d made 86 from just 32 balls and had whacked eight sixes.

It was a big win for the Foxes, who had just three to their name previously and prevented Lancashire from moving top of the North Group, which would have happened with a victory.

Earlier in the day, it was the first Old Trafford game this season for the Lancashire Thunder. Once again it was the hosts who won the toss and chose to bat.

With three successive wins behind them, confidence was high for the Thunder, even against defending champions and second-placed Western Storm.

Nicole Bolton, fresh from her unbeaten 87 from 61 balls against Surrey Stars, launched three boundaries in the third over before edging behind to the final ball of the over. Eve Jones and Harmanpreet Kaur – on her home debut – also fell for four and zero respectively.

This innings was dominated by a sublime knock from New Zealand international Amy Satterthwaite, who made an unbeaten 85 from just 57 balls.

She stroked the ball all round the wicket, launching two huge sixes before sharing a fifty stand with Emma Lamb. Her efforts took Thunder to a solid total of 153-7.

But thanks to Mandhana it was nowhere near enough. The Indian was top-scorer in the competition before this innings but she went on to notch her first T20 century.

It was a truly glorious innings from the left-hander who timed the ball beautifully. Her half-century came from just 34 balls after Bolton had put down a tough chance to take her.

She shared a century partnership with West Indian Stafanie Taylor and Mandhana moved to her own personal century from just 60 balls, including 12 fours and four sixes.

Mandhana perished in the final over, but her knock had eased Storm to a win that took them to the top of the Kia Super League table at the halfway stage. It was one of the finest innings you could ever wish to witness.

“I think the way I am batting is pleasing me more than the scores because I have been timing the ball really well so I am delighted with that,” Mandhana said.

“I think it was a really important win for us because we are leading the table and if we can win two or three more matches we can get into semis and finals. This is a beautiful stadium and so to get runs here is really good.

“The KSL is a really good competition, all the best players in the world are playing in this competition that means that it is the best competition. All the top players have come to play and there are more games on TV and live streaming which will help the women’s game move forward.

“I think we need a lot more of such competitions where we spend more time with other internationals and can learn a lot more with each other.”

Rain and bad light hit Somerset on day 3 against Gloucestershire

Season One: Episode Nine – The Twenty20 Cup, Sussex vs Kent