Lancashire will have a new face in their ranks for the visit of Durham Jets to Old Trafford after completing the signing of Afghanistan international Zahir Khan until the end of the season.

The 19-year-old wrist spinner has been brought in to add to their bowling options – although many will argue Lancashire aren’t short of options in that department, especially having only added Scotland international Mark Watt to their spin contingent last week.

Khan was present in the IPL this year with the Rajasthan Royals and will play in all formats for Lancashire until the end of the season, although he may miss some matches due to Afghanistan’s tour of Ireland.

He begins his stint at Old Trafford against Durham, who have been the surprise package of the North Group in this years Vitality Blast. The Jets sit second in the table after being leapfrogged by Worcestershire after defeat to the Rapids last week.

They have however, like Lancashire, a game in hand over the leaders and will be delighted with their position after disappointing performances in the other formats this season.

Lancashire’s campaign has tailed off somewhat in recent matches. After winning five in a row, including a thrilling contest against Yorkshire, the Lightning haven’t won any of their last three.

That included a washout at Worcester as well as a shock defeat to lowly Leicestershire on Friday night. It was a match Lancashire appeared to have under control, but 86 from 32 balls from Mohammad Nabi took the game away from the hosts and left them fourth in the table.

This match, in front of the TV cameras, therefore should be a particularly even contest between two sides who have shown their credentials in this format so far in the campaign.

In the absence of injured captain Liam Livingstone, the duty for skippering the side has fallen to Dane Vilas. Due to Alex Davies’ finger injury, the South African has also had to take the gloves. It’s a heavy workload in the frenetic world of T20 cricket to be leading the side while keeping wicket and so his contribution is pivotal for Lancashire. Vilas has only had four innings in the competition, scoring just 60 runs. He will hope to increase that output in the closing stages of the group phase.

Tom Latham has been in sparkling form for Durham this season. The opener has three half-centuries and a top score of 98* in the Blast and continued those good performances in defeat to Worcestershire last week. His 49-ball 78 proved not to be enough but the New Zealander is a key cog in the Jets side.

The loss of Livingstone, as well as Keaton Jennings, has forced Lancashire to reshuffle a side that was very well drilled. Watt came in for his debut in the Leicestershire defeat, as did Josh Bohannon, while all-rounder Danny Lamb played but didn’t feature with either bat or ball. Head coach Glen Chapple has therefore decisions to make on attempting to balance the side.

It’s set to be dry, fine and relatively warm throughout the day at Old Trafford. Despite looking used and slow to the eye, the surface has played well for batsmen in recent weeks and is likely to do so again – but will have a Kia Super League game played on it beforehand.

Bedingham and Eckersley lead Durham fight back at Trent Bridge 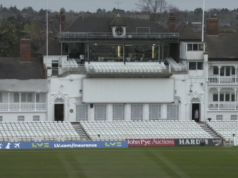