When Northants trudged off the field in early June having been humbled by Glamorgan at Wantage Road by an innings and 143 runs, very few would have had tipped them to trouble the promotion spots. Alex Wakely resigned as captain in all formats and would be replaced in the red ball format by Alex Rossington.

The popular wicket keeper would initially oversee rain-affected draws against Durham and Leicestershire before Northants spectacularly broke their duck against Sussex where they triumphed by 393 runs.

Five wins in the next six matches followed including a crucial home victory against Durham which meant that the draw in Bristol against Gloucestershire in the final round of fixtures ensured that Northants will be playing in Division One for the first time since 2014.

The white ball formats, an area of strength for Northants in recent years, did not yield a similar level of success. The weather was partly to blame for this in the T20 Blast with Northants suffering 4 washouts including two matches they looked certain to win had enough overs been bowled to constitute a result.

In the Royal London One-Day Cup, only net run rate ensured that they avoided the wooden spoon as the 50 over competition once more proved to be a format that the Steelbacks struggled in.

Northants were another county to enjoy big crowds on the back of England’s World Cup victory with Wantage Road twice being sold out for Friday night matches.

Very few fans will mind the white ball struggles though given the County Championship promotion as once again this county punches above its weight and in 2020 will deservedly take its place in the first division.

Player of the season
Adam Rossington gets a honourable mention here for being a key part in the turnaround that has taken Northants to the First Division but Ben Sanderson simply cannot be overlooked.

His final total of 60 wickets was only topped in the Second Division by Chris Rushworth and Ollie Robinson and it has led to whispers of an England call up in this particular part of the East Midlands.

Northants’ season turned following a win at Hove where Sanderson picked up match figures of 10-55. He would go from strength to strength, taking 5-46 in the win over Derbyshire and 6-54 to blow away fellow promotion hopefuls Durham. Sanderson was also leading wicket taker in both white ball formats.

Breakthrough player
An ankle injury ended Ricardo Vasconcelos’ season in mid July but what a campaign the 21-year old had to that point. He made 750 runs in 18 innings, averaging just shy of 50.

His 184 against Glamorgan was a career best. Vasconcelos also caught the eye in the Royal London One-Day Cup when striking 112 from 97 balls in a televised match against Yorkshire. It was a great shame that injury ruled him out of the T20 Blast as he would have made a serious difference to the Northants campaign which saw them end three points off the quarter finals.

It was a tough campaign for Northants stalwart Rob Newton who made 396 runs at an average of 23.29 in the Championship and saw himself dropped from both white ball sides.

Newton started the season well with 105 against Glamorgan but this was on a surface where the first innings scores were 570 and 750. Newton would only pass 50 once more in 18 innings.

It is hard to predict at this stage how the One Day Cup will shape up next season but this will be a competition Northants will target improvement.

Despite their success in the T20 Blast where they reached three finals in four years, the Steelbacks have rarely been a factor in the 50 over competition. As a county that might not be affected by players leaving for the Hundred, Northants could be well placed to challenge in 2020.

What’s next
Avoiding a repeat from the 2014 season, the last time Northants were in Division One, where they lost 12 of their 16 Championship games will be high on David Ripley’s priority list for 2020. Northants can take heart from the fact that both promoted sides stayed up in 2019 but it will be a stiff challenge for a county with one of the smallest budgets.

Gleeson shines against former side on first day at Old Trafford 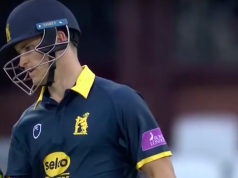 Paul Farbrace On: England’s World Cup win, the state of county cricket and his...