Home Comment and Analysis Have you Wintered well? Part 10: Surrey

Surrey fell well short of high expectations during 2019, as they were never truly in the running to retain their Championship crown. Having won the title so emphatically in 2018 many expected a similar result last year. But in truth their Championship campaign never got off the ground and they eventually finished the season in sixth place with only two wins.

Both white-ball campaigns were a big disappointment as well. A sole win in the One-Day Cup meant a rock bottom finish in the group stage, and the Rey could only muster one place higher in the T20 Blast – although the south group was extremely tight by its conclusion.

A county with such resources will be expected to compete at a much higher level across all forms, despite losing multiple players due to England commitments.

Nevertheless, Surrey has continued to recruit heavily ahead of what is already a heavily disrupted season.

Australian seamer, Michael Neser, was initially signed until July but has now had his contract terminated by mutual consent.

Hashim Amla was signed as a Kolpak player shortly after last season on a two-year deal. However, the 37-year-old will now have to be registered as an overseas player for the 2021 season, given the fact that Kolpak deals will be invalid come the end of the year. Amla appeared for Surrey as an overseas player previously in 2013 and 2014, and one would think a player of his calibre would be well worth the investment.

Reece Topley was signed from Sussex, as the 26-year-old attempts to get his career back on track after suffering from many long-term injuries. Surrey is the fourth county the left-arm quick has signed for so far in his career. Stuart Meaker went in the other direction to sign for Sussex – although the deals were not connected.

While Amla’s signing now looks slightly less appealing due to the pandemic, others may prove to be good investments due to their youth. It may seem unusual to see Surrey adopt this method, given the calibre of players the academy has produced. But Nick Kimber has been signed from Nottinghamshire and James Taylor from Derbyshire – the latter especially is a promising quick bowler.

D’Arcy Short has been signed for the T20 Blast – the one competition that may be salvaged in its entirety this season. 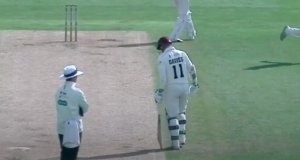