It was a day to remember for the lucky Warwickshire members allowed to enter Edgbaston for the first time this season under a Government pilot scheme to allow spectators back at sport events under new Covid guidelines.

Deep Extra Cover’s Emily Marshall was there to see what life is like under cricket’s ‘new normal’.

Smiley stewards greeted me as I entered the Edgbaston gates, and the feel around the ground was one of joy and relief. Every member of staff made an effort, and you really got a sense that everyone was very enthusiastic to be back working at the ground.

There is no doubt that Edgbaston operations have done an excellent job at putting this event on, thinking of every last detail and ensuring this is a success.

Hand santisier, which has become a staple in everyone’s life, was aplenty; temperature checks were given to both staff and media and; with a one way system for spectators, everything was on hand to make visitors as comfortable as possible.

Edgbaston advertised that everything one could need was in the ground, so people didn’t need to leave, obviously trying to sway them away from a quick trip to the Aldi across the road.

But instead of house arrest it was cricket arrest, and most didn’t mind! Socially distanced spectators were incredibly positive about their experience, and they were right to be: today was a real success and everyone was very thankful Warwickshire pulled it off.

Edgbaston welcomed spectators back today for the friendly against Worcestershire – and they did a fantastic job of keeping everyone safe. Thanks to @em.marshall05 who was there to catch the action for DEC. #cricket #cricketversuscorona #edgbaston #countycricket #bearsvpears

Apart from a few more breaks in play, to wash hands and to have drinks, it didn’t feel too dissimilar to a normal day at the cricket, something we have all craved for so long.

Members were allowed to attend with other people from their social bubble, with 1,000 spectators making up the crowd. On a breezy Birmingham day they turned out in their masses to see their first bit of cricket in almost 10 months.

The new CEO of Warwickshire, Stuart Cain, spoke after the close of play about the pilot event.

“We always want to be at the forefront of innovation and to create the best possible experience for our members,” he said.

From socially distanced, reserved seating to increased hand-sanitiser stations, we have implemented a range of processes that have given confidence to everyone in attendance

“From socially distanced, reserved seating to increased hand-sanitiser stations, we have implemented a range of processes that have given confidence to everyone in attendance, whilst also reinforcing our operational experience of delivering major events.

In the two-day ‘pre-season’ friendly between the Bears and the Pears, Warwickshire, before they take to the field tomorrow.

It was a good day for the home side with Will Rhodes and Rob Yates, in their new opening partnership in the absence of England’s Dom Sibley, putting on a partnership of 71, before Rhodes edged behind Dillon Pennington for 41.

Yates then retired after the lunch break, bringing Ian Bell and Sam Hain to the crease. The two put on a 97-run partnership, with Bell passing his half-century then retiring during the Tea break.

It was then the turn of Michael Burgess and Matt Lamb, who looked to play some shots, with Lamb falling for 18, bringing the new Bear Tim Bresnan – who has joined after his career-long stay at Yorkshire came to an end – to the crease. He and Burgess put on 50 partnership before Bresnan departed for 28.

Burgess also passed 50, before being caught on 57, and then Alex Thomson was bowled for five, before Warwickshire ended the day after scoring 315, using 10 batsmen.

Today would have been a blessing for many people, escaping their own four walls – once again cricket is always there when people need it.

In a world where everything is a little uncertain and facing numerous issues, a cricket ground is a safe haven and is enough to make you feel that little bit sane again. It was very nice to be back.

Hats off to Edgbaston. 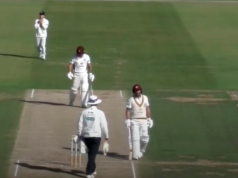