Home Comment and Analysis Six Players to Watch in 2020

21 year old Will Jacks has pressure on him to follow in the footsteps of many of his academy predecessors at the Oval, with four graduates playing test cricket for England already this summer. But pressure makes diamonds as they say, and Jacks is certainly one of them.

Jacks already has one County Championship century to his name and a handy average of 27, and has the chance this summer to improve on these stats. Surrey will be missing Rory Burns and Ollie Pope from their batting line-up for large periods now, which gives Jacks the opportunity to make a place in the side his own.

He is also a powerful one day player, and last year smashed a 25-ball hundred against Lancashire in a pre-seasonT10 game. At a ground that loves producing runs, Jacks has the talent and opportunity to make big scores and a big name for himself this season.

Having made his name through the MCCU scheme at Durham, Will Fraine (24) made his professional debut at Nottinghamshire before joining his native Yorkshire side, who were looking to rebuild in 2018.

Fraine has so far been solid for Yorkshire, solid but without a major impact as of yet. Strong and composed at the crease, Fraine averages 25 in Championship cricket, which is on the lower side. But after making his maiden Championship century against a really strong Surrey bowling attack, he will take confidence coming into the 2020 season.

Fraine has made the majority of his appearances with the red ball as an opener, which in England is always the hardest place to bat, and has shown a great maturity at the top in his young career. Yorkshire seem content with an opening partnership of Adam Lyth and Tom Kohler-Cadmore but see a place for Fraine at number three.

This is the opportunity Fraine needs to show his fine technique and turn potential into results, and there is nothing Yorkshire locals love more than one of their own being very good at batting,

Last season, Somerset came within one game of winning the Championship. Their one Achilles heel was the top of the batting order, where they changed combinations numerous times, ending with keeper Steve Davies opening up with reserve overseas player Murali Vijay.

23 year old Zimbabwe born Byrom may be given the role of opening for Somerset this season. He plays with a lovely freedom to his batting and rarely gets tied down, often keeping the scoreboard ticking over.

Byrom made his debut opening with veteran Marcus Trescothick, but failed to turn pretty 30s into meaningful big scores. Although Byrom does have two first-class centuries to his name, which highlights the immense potential the young left-hander possesses.

Byrom enjoyed success last year in the T20 blast, hitting 54 off just 19 balls on debut against Surrey. He can be a star in all forms for Somerset, following in the footsteps of Tom Banton, but where Somerset really need him is at the top of the order in the County Championship.

This could be the year pretty 30s turn into big 100s for Eddie Byrom.

Durham have produced a fair few decent fast bowlers over the years and South African born Carse has the potential to join the list. The quick made his Durham debut four years ago now, but his career has been blighted by regular injury problems.

2019 was his most productive summer, taking 35 Championship wickets at 26 a piece. Only Ben Raine and veteran Chris Rushworth dismissed more batsmen. It is true that bowlers often find success in the north east, however its the pace and aggression that Carse bowls with that has put him on the radar of the national selectors.

England clearly feel he has potential, having included him in their successful Lions tour down under last winter where he took 3-50 against Australia A and impressed mightily.

Carse should be starting this season fresh and raring to go at batsmen who will be rusty and out of season, a combination that could see him be a real handful and claim plenty of scalps. An injury free season could mean a big one for Brydon.

Another quickie to watch this season is the Solihull Express, Henry Brookes. The soon to be 21-year old already had a huge reputation of an England player in the making, and for good reason. Brookes is fast, aggressive and hostile, everything needed in a seamer.

Like most young quicks Brookes has also had his fair share of injury disappointment, but if his body can develop and remain healthy he is good to go. Truth be told, Brookes struggled with the red ball in 2019 in a Warwickshire side that also struggled. He averaged 42 and his economy rate was over 4 runs per over, stats that do not match his potential.

This year has a different feel for Brookes. He had a successful tour with the Lions over the winter and has been given time to be fully healthy. He will also have huge expectations when the T20 competition starts, with extra pace always being valued in the shorter formats.

Brookes is quick, confident and has a point to prove. Opposition batsmen should watch out.

Excitement always grows when a quick left-armer arrives on the scene, and with George Garton the excitement is justified. The 23 year old had a good summer in 2019, averaging 26 with the red ball, but he only managed three matches.

Being a leftie with considerable pace has put him on England’s radar from an early age, and he was in and around the training camps of England’s 2017/18 Ashes tour. Garton has List-A experience with 24 matches under his belt, and has had to be patient for more Championship action, mainly down the bowling depth on the south coast.

With Ollie Robinson potentially joining Jofra Archer in future England squads, there could be an opening this season for Garton to really make a impression on the circuit. If he gets it right he could be in the England conversation as the answer to the mythical quick left-armer question. 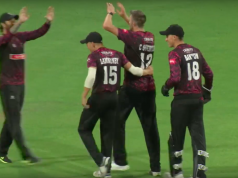