Home Comment and Analysis Bob Willis Trophy, Round 4: Team of the Week

Blink and turn around – we are four rounds into the Bob Willis trophy. Sadly the weather has played a bigger part than we would all have wanted again this week, which made the selection of this week’s Team of the Week the hardest to select yet. It caused the most debate, even if it was just amongst me, myself and I to come up with the final selection.

That being said, this is a team that would give any side a run for their money.

He’s young, he’s captain and he’s scoring runs for fun for his county, repaying the faith that county have shown in him. His double century in the first innings was more than half of his side’s total, and his 42 not out in the second was also more than half of the side’s total. In the first innings, the next highest score compared to his 207 was 55. When batting conditions are difficult, class shows and Rhodes’ class showed here.

Like Rhodes, Cook’s class showed in the 78 overs that were possible in the match against Hampshire. His 129 not out came off 215 balls, at a strike rate of 60.00. Not only was his score higher than anyone else’s by 86, but his strike rate was higher than anyone else as well. Scoring quicker than others is not something you associate with Cook, but in testing circumstances he showed he is still a cut above the rest and someone the young batsmen at Essex can aspire to be.

You’ll struggle to find a more respected player on the county circuit than Daryl Mitchell, and that is due to his work off the field and his ability and consistency on it. Mitchell’s 110, his third score this season of 80 or more, gave the Pears a solid start as they looked to compete with Warwickshire and keep themselves in contention in the Central group. They were successful and still find themselves in with a chance of winning the Central Group, with one game to go and six points to make up on their opponents in the last game Somerset.

I know Reece usually opens for Derbyshire, but his ability and performance warrants inclusion and his versatility means he could bat in the middle order. His 122 ensured that Derbyshire could amass a total, and quickly enough to score bonus points in a rain affected game. Throw in his ability to bowl a left arm pace that adds variation to his captain’s attack, a genuine wicket taking threat and at an economy rate lower than any other bowler in this week’s game – the Reece is a shoo-in for the number four spot.

When you are a young player trying to build a career in the game, you need to put down a marker and that is precisely what Charlie Thurston has done this week. Making 115 in a first innings partnership of 176 with Ben Curran, he set up the game for Northants and then in the second innings he shared a partnership of 106 with Emilio Gay, which took them to the brink of their first victory this season. For a young man his batting showed great maturity and patience and, if he carries on, he will cement his place at the top of Northants order for years to come.

I’ve never made my debut in first class cricket, but I have dreamt about what it would be like and what I would want. I would imagine Callum Taylor dreamt of making a century on debut, if he is anything like me, and that’s exactly what he did. 106 off 94 balls, batting with the tail, to give his side’s total some respectability. Then throw in his wicket of Team of Week team mate Charlie Thurston, and it is pretty much the perfect debut.

For once, a burst bubble was a good thing for Ben Foakes. His first match outside of the England bio secure environment and Foakes showed why England wanted him in that bubble. He is an outstanding keeper and those people who said his batting wasn’t as good as others, they were wrong. His 118 was the highest score by 88 runs in the first innings, and in the second his 57 was the highest scorer by 15 runs. Without Foakes, Surrey would have lost by more than the 17 runs that they did.

Craig Overton is always around the England set up and, with figures like those he produced in bowling Somerset to victory over Gloucestershire, it’s easy to see why. He has consistently performed well this season and taken wickets regularly. His 9 wickets in this game took his total to 23 for the season and, more importantly, Somerset to their third victory and their 12th bowling bonus point – one of only three sides in the country to have taken all 40 first innings wickets available so far.

When you are making your way in the game you want to improve, you want to contribute. Martin Andersson is doing just that. In Middlesex’s victory over Sussex, Andersson delivered his best bowling figures of his short career, claiming match figures of 7 for 98 and enhancing his growing reputation as an allrounder and one who can influence matches and victories for his county. While 17 and 27 may not look like massive contributions, they were at crucial times. In the first innings he steadied the ship and, in the second, he guided Middlesex to victory.

Wickets and runs. If you can contribute those to any side, you are always going to get noticed. In a side that boasts Darren Stevens it is easy to get over looked, but with performances like the one Milnes put in this week, he will continue to get noticed more and more. Milnes’ figures of 7 for 111 were the best match figures of his career, and he is only getting better. His growing ability with the bat is another string to his bow, and it’s going to help Kent to more and more victories like the one secured today.

Davey is another player who may sometimes find himself overlooked in favour of more prominent players in their side. His 7 wickets in this game, however, certainly catch the eye and draw attention away from some brighter lights, as does his total of 18 wickets this season. He has made an impact for Somerset all year and on a pitch which has historically favoured batters and spinners. He is performing and takes wickets, especially at the top of the order, which sets the tone for the innings increases the chances of keeping Somerset on top of the Central Group. 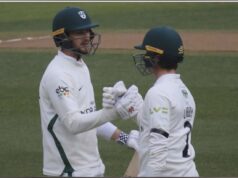 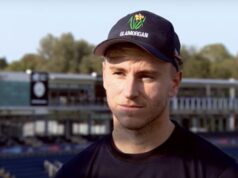