A blitz of boundaries from Jemimah Rodrigues (60) and Laura Kimmince (31) for the Northern Superchargers galvanised their innings and helped their side to a 27 run win.

Fourteen fours in the space of 22 deliveries catapulted the superchargers toward 149 for seven. However, wickets tumbled towards the end as Sammy-Jo Johnson (4-15) took three wickets in five balls to give the Trent Rockets a glimmer of hope.

There will always be what-ifs in cricket. Today was a prime example of that. Jemimah Rodrigues facing her first ball of the day, appeared out lbw; the umpire was unmoved, and the Rockets left the opportunity to review it. Had they done, Rodrigues would have been walking back for a golden duck.

Instead, Rodrigues made the Rockets bowlers pay the ultimate price. An innings of 41 balls was enough for the in-form Indian international to ten fours. Admittedly, it wasn’t a faultless innings.

Still, Rodrigues never faulted, and when Kimmince joined her, the boundary was found regularly, with the unfortunate Sarah Glenn conceding five consecutive fours. At that stage, it looked like a total of 175 was achievable. But, in the end, Northern Superchargers had to settle for 149 for seven.

On a worn pitch and with spin options available for Northern Superchargers, it was always going to be a difficult task for Trent Rockets, despite the firepower at the top of their order.

In Rachel Priest and Johnson, few sides have openers who can clear the ropes at will. Unfortunately, for the second game in a row, it didn’t work. Priest misread the pace of Elizabeth Russell and was caught at mid-off. Johnson couldn’t clear deep mid-wicket, and the Rockets were suddenly two down for 36.

It would be an essential phase in the game, with Natalie Sciver and Brunt in the middle. They were ahead of the Superchargers for the first 50 balls, but they couldn’t keep up with the pace, and when Sciver was caught and bowled by Hollie Armitage for a 23 ball 33, it felt like game over.

Brunt kept trying, though, and ended not out on 43 from 36 balls. Had Glenn stuck around for another ten balls, it could have been a different story, but Trent Rockets had given themselves too much to do.

It might be a case of looking at the side again; it relies on seam-up bowlers where the teams who have succeeded so far are packed with spinners. The fact that Lucy Higham hasn’t been used so far is a little bizarre, as she offers something with her off-spin.

Superchargers have momentum on their side, and they look like a well-balanced side that could cause a few upsets over the rest of the tournament. 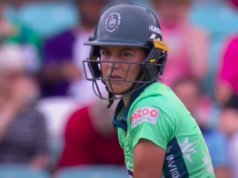 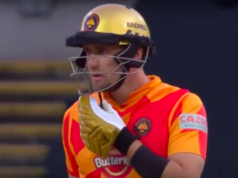