Home Gloucestershire Preview: Lancashire v Gloucestershire LVCC
Australian fast bowler Peter Siddle has been named in Lancashire’s 12-man team for their LV= County Championship encounter against Gloucestershire at Emirates Old Trafford.
Siddle is expected to start in his fourth and final game for the Red Rose who are top of Division Two after a strong start to the 2015 campaign. Gloucestershire enter this fixture off the back of a nine-wicket victory over Essex at Chelmsford, while Lancashire experienced a high-scoring draw at Wantage Road against Northamponshire.
Lancashire’s last encounter with Gloucestershire at Bristol carries fond memories for the Red Rose faithful, as the visitors celebrated their return to the first division in a rain-affected draw. The Bristol-based county are a side very much in the grips of transition after losing arguably their two best players in the Gidman brothers – Alex and Will.The introduction of Richard Dawson as head coach at Gloucester has also seen a change in leadership after the departure of John Bracewell, who now coaches the Irish national side.

Despite wholesale changes and a small squad, Gloucestershire have made shrewd acquisitions to fill the voids left by the departing Gidman brothers, including Australian batsman Peter Handscomb. Former Ashes-winner Geraint Jones has also taken over as captain after enduring a tough loan spell last season in which the wicketkeeper contracted an eye problem.

Lancashire dominated their second-to-last meeting at Aigburth in the 2013 season, but the Red Rose county fell one wicket shy of claiming victory as Ed Young and Liam Norwell stood strong at Liverpool.

Alex Davies has had a phenomenal start to the 2015 season with the bat and he will be aiming to secure his first Championship century after falling agonisingly short in Lancashire’s last home game against Kent. A return of 265 runs in four innings is a sign of his development as a batsman and the 20-year-old is becoming one of the first names on the team sheet despite the extended absence of Jos Buttler, who is centrally contracted to England. Davies has grabbed this opportunity with both hands, proving to be a very dependable batsman wherever he is asked to bat for Lancashire, enduring a tough spell as opening partner to Paul Horton last season.
What stands out this season is his ability to play big innings but also responsible innings. He has the capacity to dig in and frustrate the opposition when the situation demands patience, but when he has the opportunity to play the more aggressive shots he is able to do so and with the assurance of a player with many more years of experience. Back-to-back career-best scores of 89 and 99 against Derbyshire and Kent respectively have even lead to suggestions among Lancashire fans that, should Buttler be available for selection, that they would prefer the young wicketkeeper to play ahead of Buttler, who has now represented England in all formats. 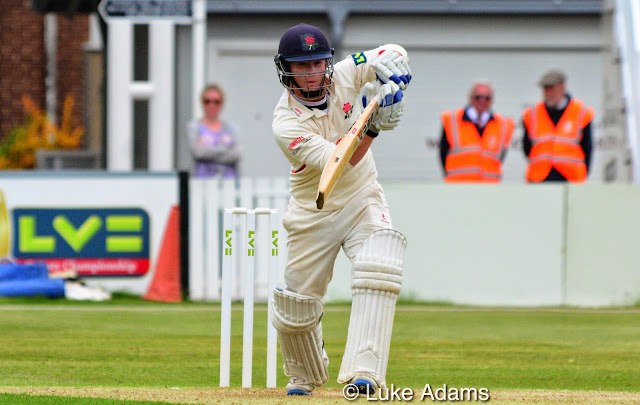 Bristol-born batsman Chris Dent has experienced a similarly impressive start to the season, playing a key hand in Gloucestershire’s recent win against Essex. The opening batsman recorded half-centuries in both innings, including an unbeaten 52 in his side’s run chase as they cruised to a nine-wicket victory at Chelmsford. Dent’s highest score of the season so far came in the curtain-raiser against Northants in which he scored an unbeaten century in Gloucestershire’s second innings.
Team news:
Lancashire have named the same 12-man team which travelled to Northants, with the only real point of debate being who will play out of Tom Bailey and Nathan Buck. Bailey has failed to take a wicket in his last two games and Buck is yet to make his Championship debut for the Red Rose.
Club captain Tom Smith is still sidelined with a back injury, one which could be worse than first feared after it was revealed this week that the all-rounder has bulging discs which may require surgery if he hopes to return as soon as possible.
Lancashire 12-man team: Steven Croft (captain), Tom Bailey, Nathan Buck, Jordan Clark, Alex Davies (wicketkeeper), Paul Horton, Kyle Jarvis, Simon Kerrigan, Alviro Petersen, Ashwell Prince, Luis Reece, Peter Siddle.
James Fuller is the only player to miss out from Gloucestershire’s trip to Essex as the visitors make the long trip to Manchester with a 12-man squad of their own.
Gloucestershire 12-man team: Geraint Jones (captain), Will Tavare, Chris Dent, Gareth Roderick (wicketkeeper), Hamish Marshall, Kieran Noema-Barnett, Peter Handscomb, Matt Taylor, Liam Norwell, David Payne, Tom Smith, Craig Miles.
Weather and conditions:
No rain is forecast for the match although conditions should offer something for the bowlers with a particularly windy start to the match tomorrow morning and it is also expected to get warmer as the match progresses. Darker clouds on the first day could see bad light becoming an issue, but sunshine should become a more permanent feature for the rest of the match. For a full forecast click here.
Date: 10 – 13th May
Ground: Emirates Old Trafford
Time: 11.00 am
Umpires: Michael Gough and Graham Lloyd
Odds (via SkyBet): Lancashire 2/5, Gloucestershire 2/1

Are Warwickshire up for the challenge of the Bob Willis Trophy Final?