Yorkshire’s victory Durham on Wednesday night threw the fight for the final two spaces in the t20 Blast North group wide open, but if the White Rose are to reach the quarter finals they will get past already qualified Northamptonshire.

In a quirk of the fixture list, the two sides have yet to play each other but do so twice in the final two matches, tonight’s encounter at Headingley tonight, followed by the meeting at Wantage Road in the final round of fixtures next Friday.

It had looked like another season of struggle for Yorkshire in the shortest format when they lost their first three games, which were then followed by two straight washouts.

However a hard fought one run victory over Derbyshire proved to be a turning point in their campaign, and the start of a run of tight wins, with another one run win in the return fixture against the Falcons, with two run and five run victories also followed as they took five wins from the last seven.

The last came as they racked up 223-6 against Durham on Wednesday, bringing them level with Durham, who currently occupy the fourth qualifying spot, on 12 points, and with Worcestershire and Leicestershire also on the same tally, though with both only having one game left, it remains all to play for.

Northamptonshire, meanwhile, booked their spot in the last eight on Tuesday, putting back to back defeats behind them to trash the Birmingham Bears by 74 runs and make the journey up to Leeds knowing one more win will guarantee a home tie.

Last year’s runners up, the Steelbacks have once again impressed in this year’s competition, winning seven of their ten completed fixtures to seal a third quarter final in four years, with Alex Wakely’s men especially impressive when chasing, having been successful in all five of their chases, whilst their total of 200-5 on Tuesday night showed they can set a score as well.

Headingley has been a happy hunting ground for the Steelbacks in t20, who have won all of the three completed games they’ve played in Leeds, including the last two seasons, with one wash out in 2011.

David Willey hasn’t produced the fireworks many might have expected so far this Summer since joining Yorkshire, with a modest return of 99 runs and six wickets form his seven matches in the blast so far. However, he showed signs of top gear in the week and the sight of his former teammates could be all he needs to reach it.

Rory Kleinveldt returned from injury for Northants at Durham a week ago, and the addition of his experience has given the side a boost just when needed. His tight spell turned the game against the Bears in their favour, and his control with the ball, not to mention his late order hitting, makes him an invaluable member of the Steelbacks side.

Yorkshire have named an unchanged 14 man squad from the victory against Durham on Tuesday, and are likely to stick with the same 11, with Adil Rashid included in the England party for the second test.

Northants are boosted by the return of Ben Duckett, who has been released by England Lions to play for his county tonight, before re-joining the Lions squad for their next game on Saturday. He will likely replace Rob Keogh in the only change to the side.

The forecast is mixed for Leeds on Friday, a far cry from the soaring temperatures seen during this week, with showers forecast throughout the day, but hopefully not heavy or frequent enough to prevent play, with the night set to feel much cooler with temperatures in the low 20s. 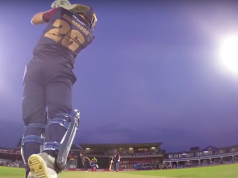